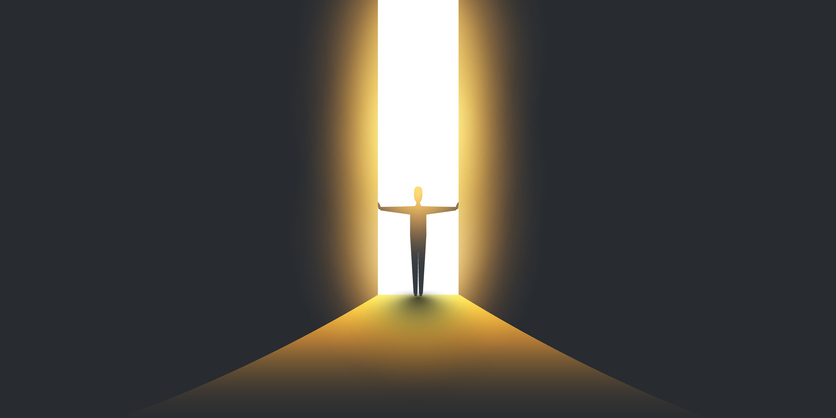 The federal Internal Revenue Service (IRS) and every state revenue department across the country unequivocally say a capital gains tax is an income tax. Now thanks to public records we can see what Washington’s Department of Revenue (DOR) has been saying about capital gains income tax proposals. For example, DOR warned (any emphasis was used by DOR):

On September 13 last year, I sent DOR an email asking this:

Is DOR aware of any state in the country with an ‘excise tax’ on capital gains?

The IRS issued a letter last year saying taxes on capital gains are not ‘excise tax’ but income taxes.

I contacted every state revenue agency in the country and each state said the same thing.

Thank you for the assistance.”

After no response from DOR, I followed up on September 19 with this email:

“Following up on this email from last week. Hoping you can point me to any other state or federal authority that DOR is basing its comments that a tax on capital gains is an ‘excise tax.’

After researching this topic for the past several years, I haven’t been able to find any tax authority in the country or world that doesn’t classify a capital gains tax as an income tax.”

Still with no response, I submitted this public records request on October 3 asking for:

“A copy of the following information and records: All Department of Revenue records (emails, memos, etc.) between the dates of January 1, 2010 and October 2, 2019, discussing what type of tax a capital gains tax is - whether it is an excise tax or income tax.”

Among the public records I received was this internal September 23 DOR email:

"FYI. I have not responded to Jason."

Last Friday I received the final installation of my records request. Here are screen shots of some of the interesting records I received (full copies available on request): 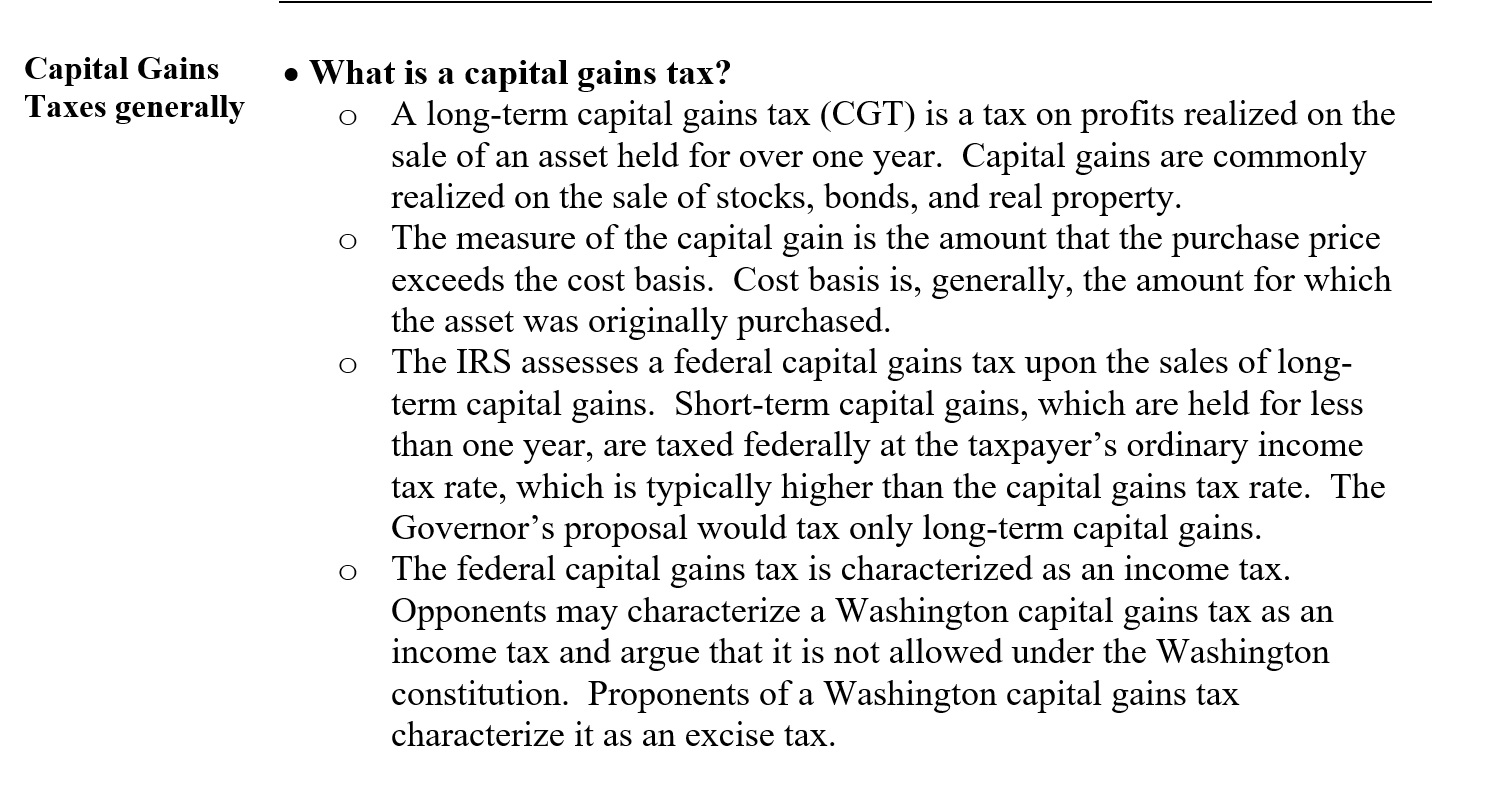 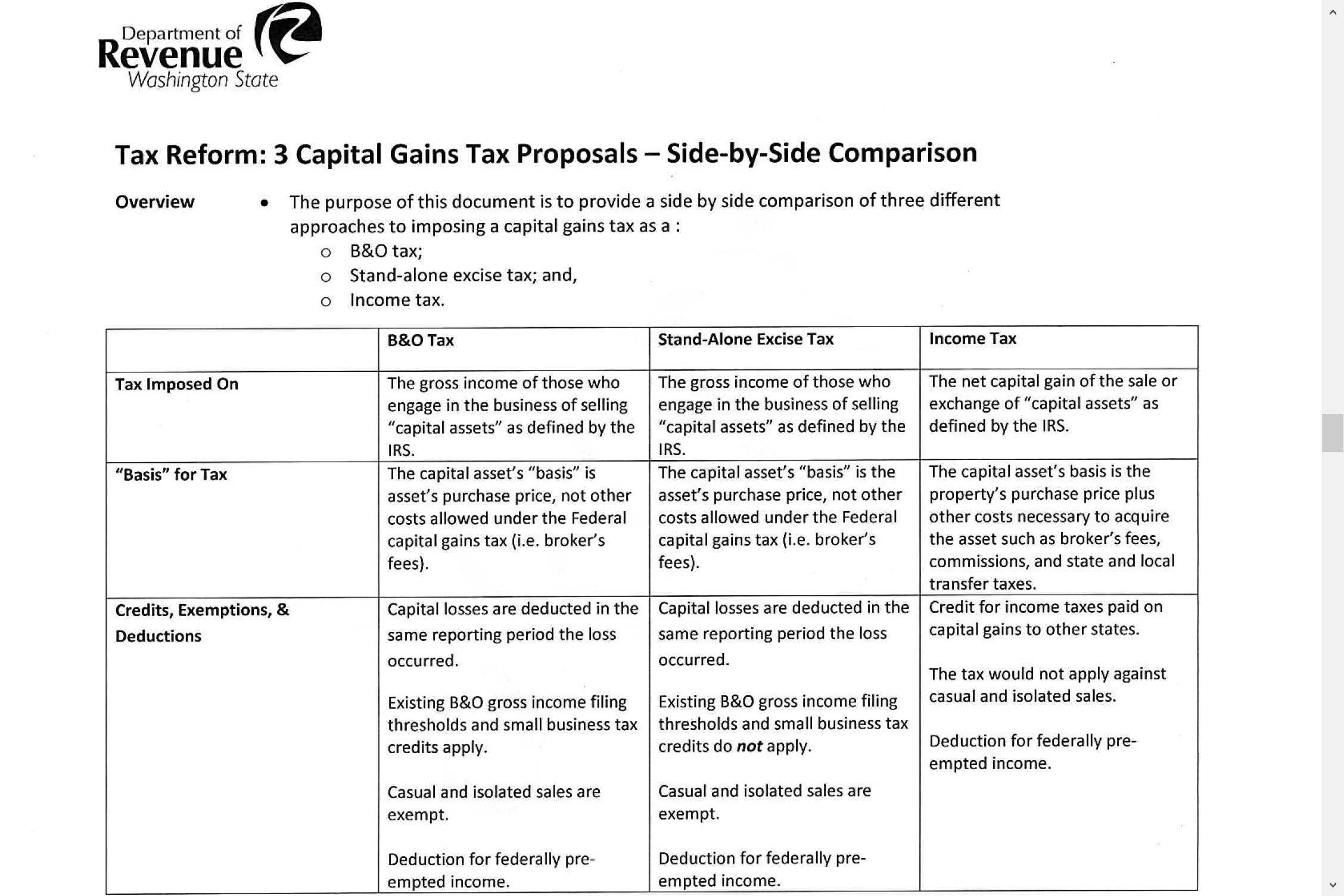 The income tax column above is noteworthy. The Washington proposals would tax the "net long-term capital gain" and provides a credit against "any legally imposed income or excise tax paid by the taxpayer to another taxing jurisdiction on capital gains"

In fact, the 2019 bills describe the state capital gain tax reporting requirement as:

Does any of this sound like an “excise tax” to you?

Every tax authority in the country has made clear a capital gains tax in an income tax. The only ones who appear to be confused by this fact are those trying to circumvent Washington’s constitution and voters’ consistent rejection of income taxes.