As everyone awaits Amazon’s decision on where the company will locate its “second, but equal” H2Q headquarters outside of Seattle, some have questioned whether the company will choose a right-to-work state.

Amazon is one of the country’s largest nonunion employers, and unions have tried, unsuccessfully, for over two decades to unionize Amazon.   The retail giant has so far proven impenetrable to organized labor, successfully fending off unionization efforts since the company was founded in Seattle in 1994.

It’s no secret that Amazon wants no part of a union workforce.  Unionization would hamper the company’s flexibility to quickly respond and adapt to changing markets and business models and stymie efficiency-improving innovations that improve the customer experience and keep prices low.  Can you imagine the union’s howls of protests to Amazon’s foray into human-free stores and delivery robots?  In short, all of the characteristics that have made Amazon so successful and wildly popular with its devoted customers would face opposition from the union bosses.

In fact, one labor policy expert says one of the reasons Whole Foods was enticing to Amazon was the popular grocery chain’s lack of a unionized workforce:

“When you’re dealing with a union, it makes it harder.  They [Amazon] want to experiment with this and see where can I squeeze out costs and where can I can expand my market.  They need flexibility in the way they use capital, labor and technology and they want that discretion.”

Of course, Amazon isn’t alone in considering unionization and the constraints that come with it to be bad for business.

According to the 2017 annual survey of more than 500 CEOs by Chief Executive magazine, 21% say when considering where to locate new jobs they will only consider states with right-to-work laws, which prohibit forced unionization.  Another 57% say that while right-to-work is not a deal-breaker, preference is given to the 28 states with such laws.  So when looking for a new state to set up shop, create jobs and hire workers, nearly 80% of CEOs want to be in a right-to-work state. 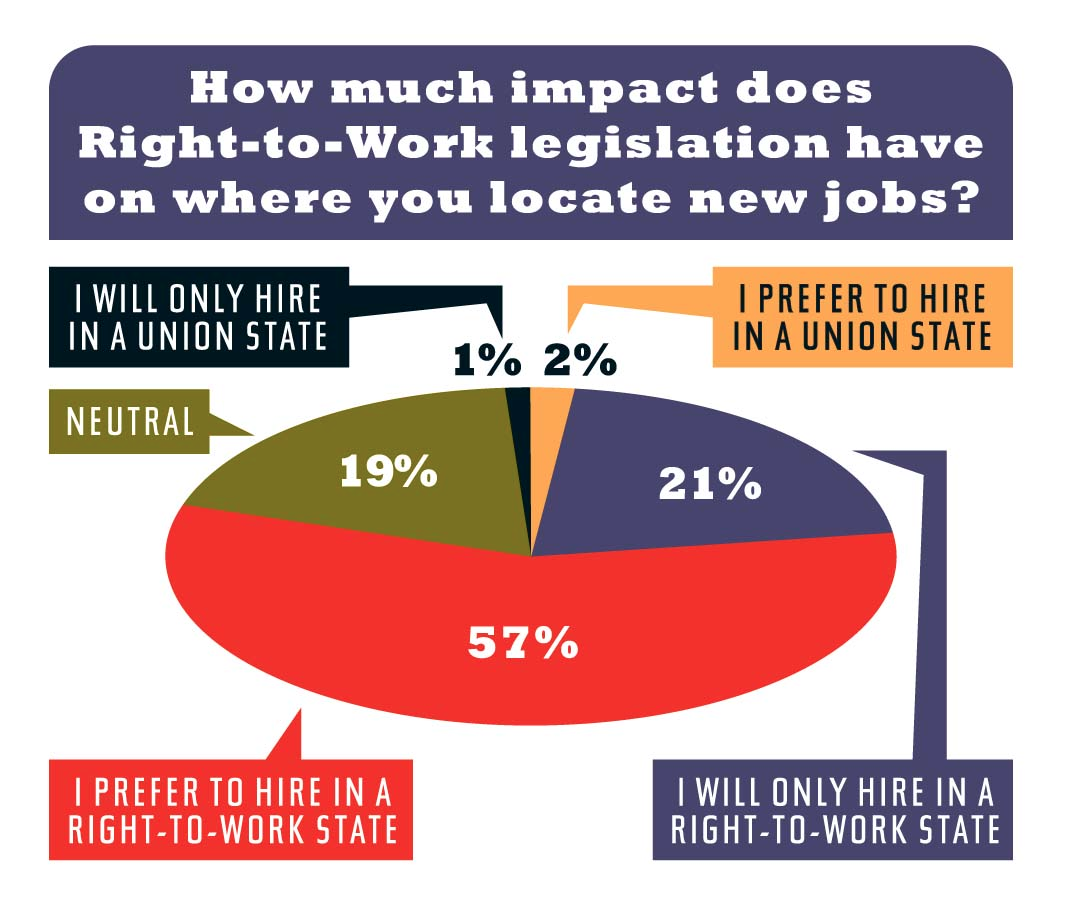 The Chief Executive survey also asks those CEOs to rank the very best states and very worst states to do business, based on taxes, regulations, workforce quality and living environment.  The top 10 ranked states are all right-to-work, while the bottom 10 are all states without a right-to-work law, meaning forced unionization is the law of the land.  As one site-selection consultant notes, the bottom ranked, non right-to-work states, “have consistently high tax burdens and onerous regulatory environments—so they’re not only perceived as being business-unfriendly, they are. It’s reality.”

As a side note, Washington, which is one of the 22 states without a right-to-work law, misses the bottom 10 ranking by one spot, coming in a dismal 39th.

The ranking by CEOs aligns with a recent ranking by CNBC, which placed Washington 32nd when it comes to the cost of doing business and 31st in business friendliness.  The state also ranked poorly for the condition of our roads and endless traffic jams (32nd), and even worse for our high cost of living (37th).

However, thanks to CNBC’s unique methodology, our state’s skilled and educated workforce, strong economy, investments in technology and innovation, great quality of life and access to capital helped override those low rankings to push Washington to the top of CNBC’s list.  Clearly CEOs (you know, the ones running businessess) see things a little differently than the data crunchers at CNBC.

As we near tomorrow's deadline for cities to submit their H2Q proposals to Amazon, we'll soon find out what attributes Amazon values most when they announce which lucky city convinced them to invest $5 billion in their city building the H2Q, create 50,000 new jobs that will pay out tens of billions in salaries every year, and inject billions more dollars more into that city’s economy and budget.

Will it be a city in a right-to-work state?  Maybe, or maybe not.  After all, Amazon picked Seattle before, and Washington does not have a right-to-law.

Of course, Washington also does not have an income tax, which Amazon clearly values.  Amazon CEO Jeff Bezos is well known for his “zeal for tax avoidance.”  As state Senator Guy Palumbo points out, “It’s well documented that when Jeff [Bezos] was driving across country and writing the Amazon business plan…one of the major things he was looking at was no state income tax.  Had we [Washington] had an income tax back in 1995, we wouldn’t have Amazon”

Which brings us to Seattle’s recent passage of the city’s new income tax. Given Bezos determination to pay as few taxes as possible, many have questioned the timing of Amazon announcing the “second, but equal” headquarters shortly after Seattle passed the illegal new tax.

So will it be right-to-work, or income taxes?  Or maybe both—that would leave cities in Texas, Florida, Nevada and Tennessee as the likely front-runners.  Interestingly, Texas and Florida hold the top two spots on the CEO survey of best states to do business, with Nevada and Tennessee rounding out the top ten list at sixth and seventh.  Stay tuned.