When it comes to grocery bags, the most recent data are clear: organic cotton grocery bags are the most environmentally destructive.

And it isn’t close.

Several local cities, including Kirkland, Tacoma, Seattle, and Issaquah have all banned plastic grocery bags, arguing they are harmful to the environment. All grocery bags use resources, but the question is which bag uses the fewest resources and causes the least environmental impact.

As we’ve noted in the past, analysis of resource impacts – from energy to water pollution – determined plastic bags had the lowest environmental impact. In 2011, the UK Environment Agency found grocery store customers would have to use a cotton bag 173 times to break even in energy use compared to plastic bags. For water pollution, that number increases to 393 times.

Despite the science, these cities banned plastic bags anyway.

A new study from Denmark indicates they may want to rethink the ban or add organic cotton bags to the banned list. 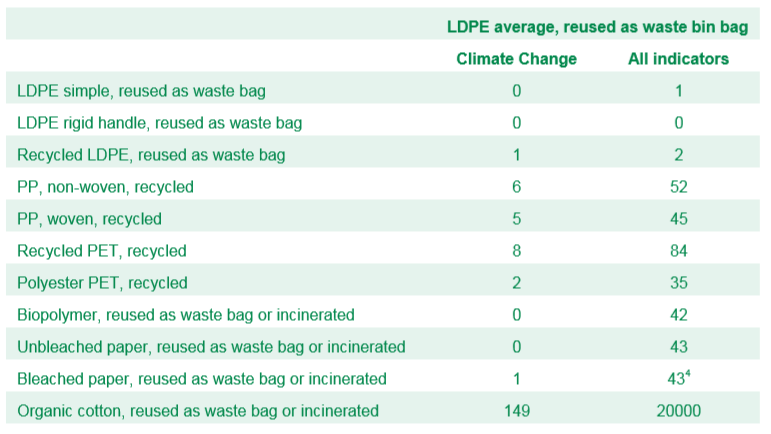 For most environmental categories, plastic LDPE bags (the ones commonly used in grocery stores), are the best choice. The study calculated the number of times consumers would have to use each type of bag to equal the environmental impact of plastic LDPE bags. The numbers are stark, with organic cotton bags requiring 20,000 uses before it breaks even on all environmental indicators combined.

Cotton bags fared a little better in the Danish study than the UK study. For example, on energy use, consumers would only have to reuse a cotton bag 53 times to break even with plastic bags. For water pollution, it is 212 times, better than the UK study, but still high.

I leave it up to each council as to which they choose, but simply ignoring this new science is not an option for those who are honest about addressing environmental protection.