In the era of fake news it's important not to believe everything you see on social media. This is why I asked our Communications Director to take a quick trip to a Seattle Costco for me to confirm images explaining "City of Seattle Sweetened Beverage Recovery Fee" and where to go to avoid the new tax. Turns out these images are legit:

Here is a close up of the disclaimer to shoppers: 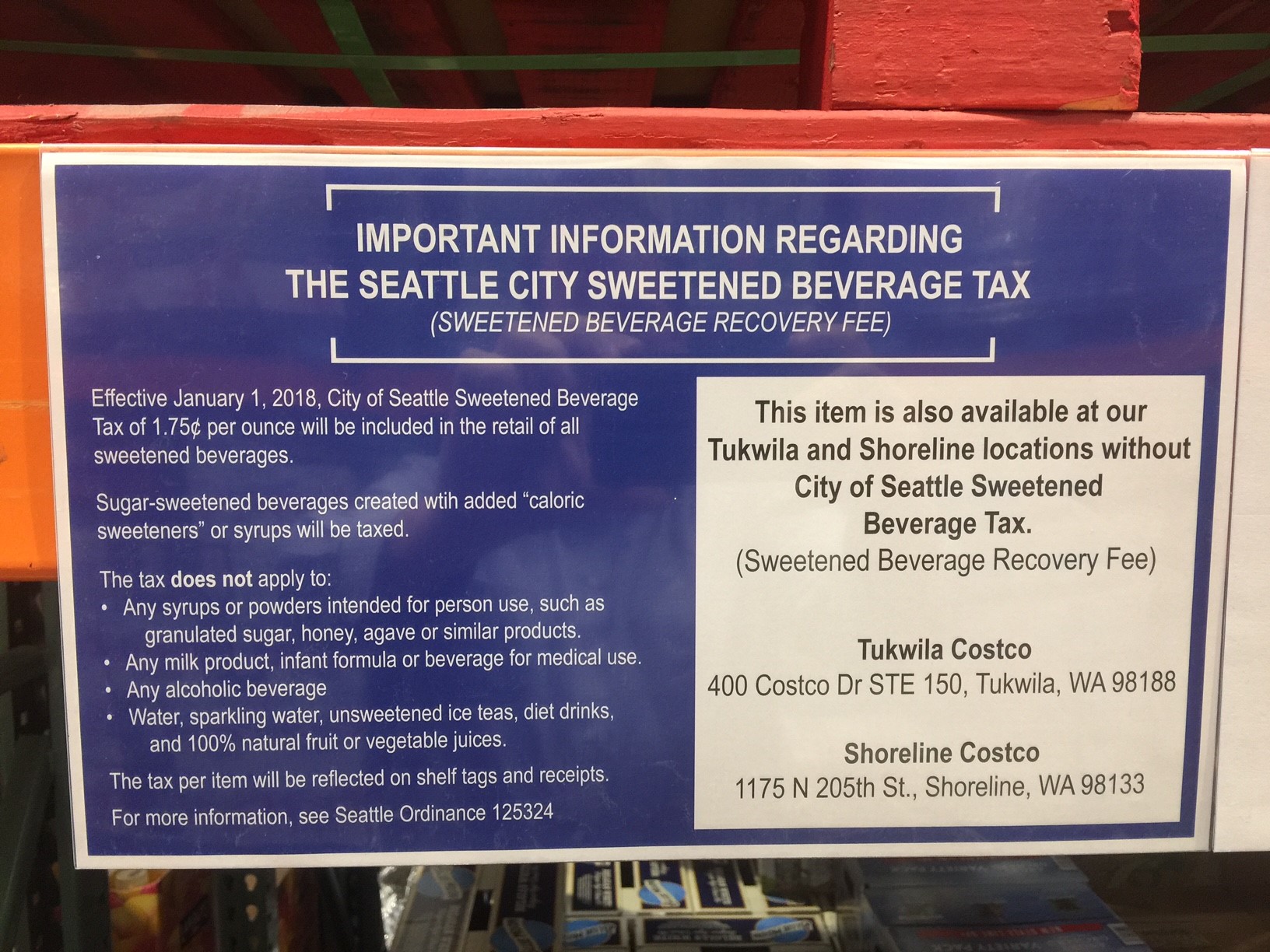 You may recall the Seattle City Council adopted this new tax last summer on a 7-1 vote (despite its members constantly complaining about other regressive taxes). This action was taken despite the united opposition of the Seattle Metro Chamber and labor groups. Their joint press release warned:

"Leaders of the Martin Luther King County Labor Council and the Seattle Metropolitan Chamber of Commerce today issued a joint statement urging the Seattle City Council to shelve plans to impose a tax on sweetened beverages that will wreak economic harm on small businesses and working families alike. The joint statement follows steps that both organizations took separately earlier this month to formally oppose the tax . . .

'In recent years, beverage taxes have become more and more attractive as potential revenue sources for cities and municipalities across the United States, including in the City of Seattle,' said Teamster Joint Council 28 President Rick Hicks. 'However, these taxes have been shown time and time again to be destroyers of good jobs in the beverage industry and other related industries. Despite mounting evidence of this, beverage tax proponents have consistently failed to consider the adverse impacts these taxes have on the thousands of Union members who produce, warehouse, and deliver these products.'"

Costco's "City of Seattle Sweetened Beverage Recovery Fee" disclaimer brings to mind this warning from the fiscal note before the tax was adopted:

"The proposed tax will likely increase the price of sugar-sweetened and diet beverages to all consumers in Seattle. People with lower incomes will pay a higher proportion of their income for this tax than those with higher incomes for each ounce of beverage purchased. Those that are better able to travel outside of the City of Seattle to shop, will be better able to avoid the tax. Those that are immobile or unable to afford transportation outside the City, will have no choice but to pay the higher prices for these products."

"What’s also been lost in the soda tax kerfuffle is the potential job losses, as we’re starting to see in Philadelphia. Retailers, distributors, and restaurants are all bound to be affected, either through smaller profit margins or reduced sales. One beverage company, Pepsi, announced layoffs related to the Philadelphia tax.

At the end of the day, soda taxes are a regressive tax on a product that’s probably fine in moderation. These taxes likely won’t fund what’s being promised, won’t resolve the obesity problem, and will hurt workers and consumers. Based on the mounting evidence, fans of the soda tax might want to take a step back and consider what’s best in the long-term, not just the short-term political gains."