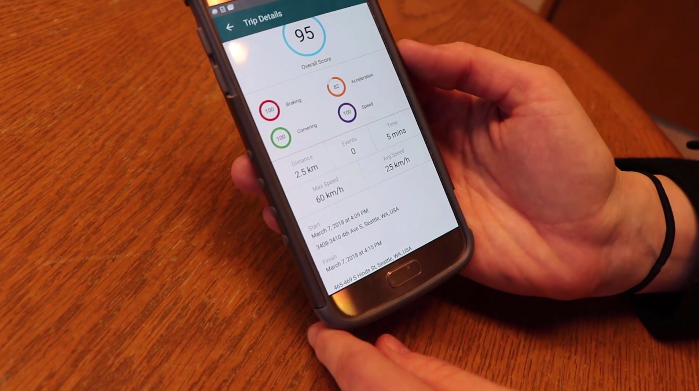 If the Washington State Department of Transportation (WSDOT) Secretary gets his way, the state will mandate GPS tracking to charge drivers not just for every mile they drive, but adjust the charge based on when, where, and why you’re taking the trip.

During the July 15th virtual Washington State Transportation Commission (WSTC) meeting, WSDOT Secretary Roger Millar described how he would implement a Road Usage Charge (RUC). As it turns out, Millar’s vision for a RUC fundamentally contradicts and undermines what the Commission has recommended.

The WSTC has led the effort to study, test and report back to the legislature on the feasibility of a Road Usage Charge in Washington State. According to the agency, the RUC is intended to serve as a replacement for the gas tax, charging motorists for every mile they drive rather than for every gallon of gas they purchase at the pump.

However, some officials and transit activists want the RUC to serve as a general mileage tax that can be diverted from roads to subsidize transit, bike and pedestrian projects. To make matters more complicated and political, some officials, like Secretary Millar, advocate that the RUC should be layered with different functions – not just charging people per mile driven, but making it more expensive to drive during peak commute hours, or charging different rates on different roads.

These proposals intentionally make the RUC more burdensome on drivers and allow politicians to use the money for whatever they decide is best.

Further, this approach dilutes the user-pays/user-benefits principle that an ideal RUC should embody. The user-pays/user-benefits principle recognizes that people should pay directly for their use of highways and receive a direct benefit in return. In fact, the current Washington State gas tax functions this way (though this isn’t the case in many other states), because it is constitutionally protected under the state’s 18th Amendment for highway spending alone. Though gas tax revenue isn’t immune to politics (what gets funded and when), it cannot legally be spent on anything but highway purposes.

Similarly, if a RUC is intended to replace the gas tax, it should replicate the features of a gas tax: the money should only be spent on roads and should not function as a costly social engineering tool. As technology advances and vehicles use different methods of propulsion, having a conversation about ways to fund and maintain the roads we depend on regardless of the kind of vehicle we drive is necessary. Per-mile charging is an important part of that discussion.

We recognize, however, that government officials can distort and abuse good ideas in pursuit of their own ideological goals. Millar’s vision for a RUC is a perfect example of that distortion, and represents why it is so difficult for the public to trust policymakers with this idea.

At the WSTC meeting, he said that a RUC should be layered with congestion pricing, rather than just being a per-mile charge. He went on to add, “When I spoke with the leadership in DC - the House Transportation and Infrastructure Committee and the Senate Environment & Public Works Committee, the chairs and ranking members of those committees – all of them want to see Road User Charges happen sooner than later in the US – and all of them want to see that Road User Charge construct include congestion pricing – the ability to vary the pricing by geographically where you are, by the time of day and by the trip purpose.”

Contrary to Millar, the Commission has said that a RUC should not incorporate congestion pricing (see last bullet in slide below). 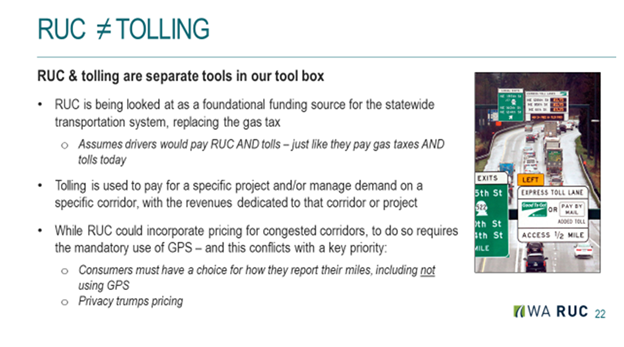 The Commission states that though a RUC “could incorporate pricing for congested corridors,” “to do so requires the mandatory use of GPS,” which conflicts with key priorities. Those priorities are choice (being able to choose a non-GPS method to submit mileage information) and privacy (not sharing your location as you travel if you don’t want to).

In the Commission’s Final Report on RUC, one of the key recommendations listed is for the legislature to “enact laws that protect personal privacy” (p.70).  This would include things like making sure drivers can choose not to use a GPS-enabled device, software requirements that keep driving data inaccessible to others, and policies that exempt RUC mileage data from public disclosure (current law does not provide for that exemption). This recommendation precludes congestion pricing, which would require location data.

The Commission also recommends that a RUC be protected under the state constitution’s 18th Amendment so that the money can only be spent on highway purposes. Washington Policy Center has highlighted for over two years the importance of the 18th Amendment to make sure that any new tax is a user fee like the state gas tax is.

We understand the Road Usage Charge is probably the last thing on your mind during these unprecedented times. It’s probably frustrating to read that while people are focused on keeping the lights on at home and in their businesses, some public agencies are focused on finding ways to track our travel choices and behavior. That’s why Washington Policy Center will continue to keep a close eye on this issue – especially as we head into what will likely be a very contentious legislative session in 2021, where every possible tax may be on the table in the transportation budget debate. 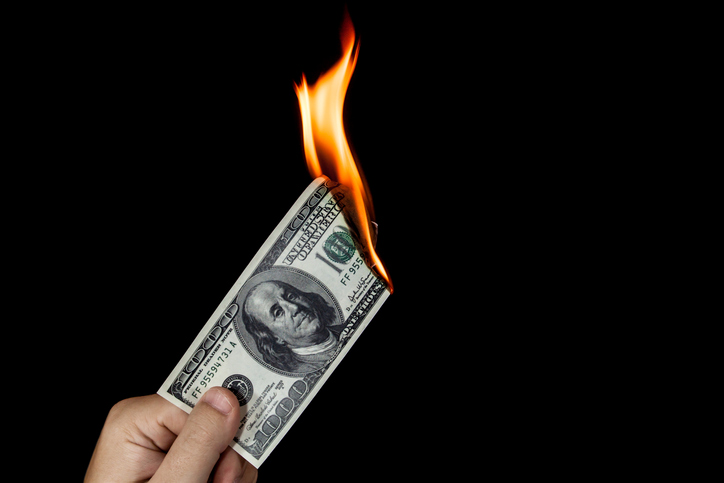