The Rebecca Friedrichs story and why she is a hero 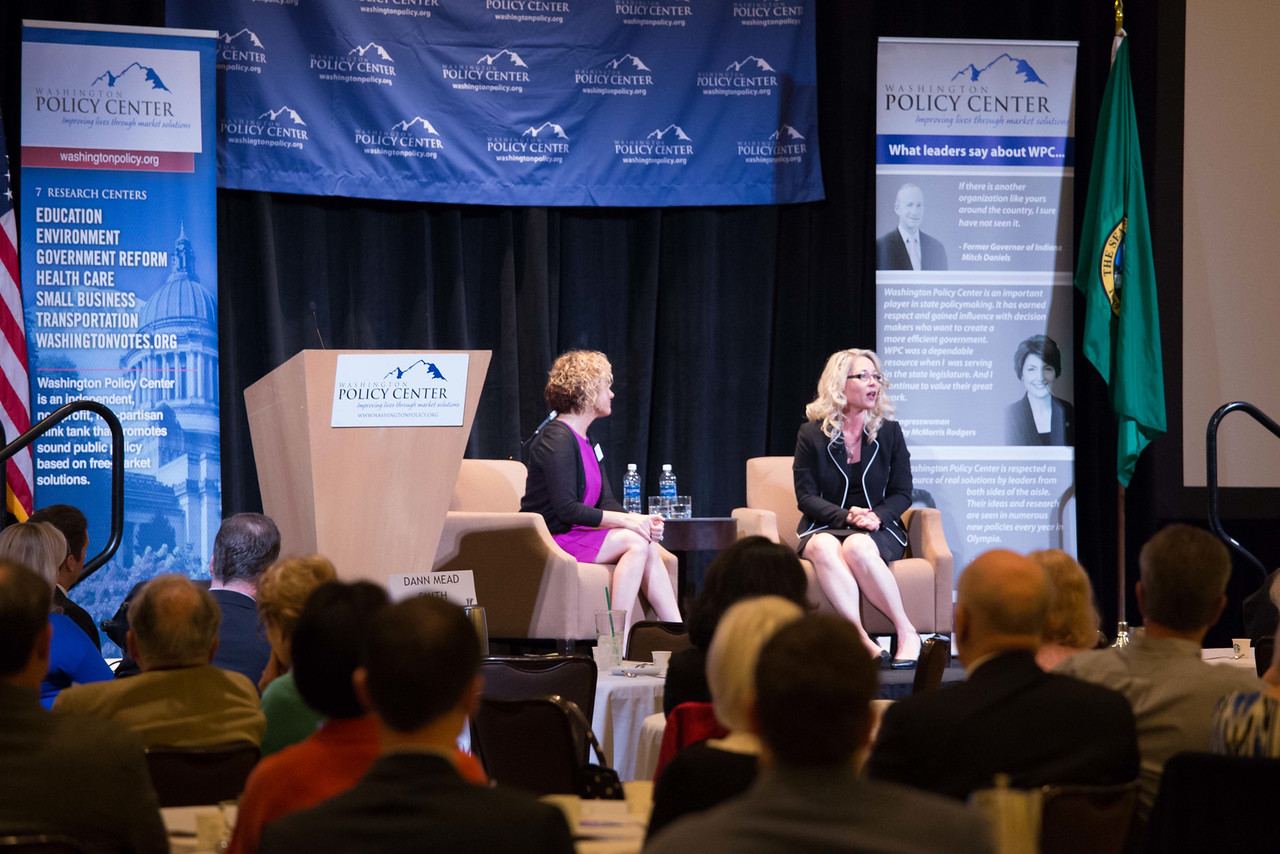 Last week WPC took its policy show on the road with the 3rd Annual Solutions Summit events in Eastern and Western Washington.  The back-to-back events in Kennewick and Bellevue drew hundreds of attendees; and many of them showed up just to hear Rebecca Friedrichs talk.

So who is Rebecca Friedrichs and why do so many people want to hear what she has to say?

Rebecca Friedrichs is the name behind one of the most important, and potentially game-changing legal cases in recent history.  Friedrichs v. California Teachers Association was filed in the U.S. Supreme Court by Rebecca and nine other public school teachers who believe the agency fees and union dues they are forced to pay violate their First Amendment rights.

Rebecca shared with WPC and Solutions Summit participants her story of how she went from a teacher who simply wanted to educate children, to the lead plaintiff in one of the most important legal cases of our time.

A 29-year veteran of elementary-school classrooms in Orange County, Friedrichs has spent nearly three decades battling the politics and policies of the union she is forced to pay to represent her.  After years of opting out of the union (but still forced to pay the union “agency fees”) and being shunned, ostracized and labeled a “radical right winger” by the union, Rebecca decided to try make her voice heard and change the union from within.

She became a full member and served on her union’s executive board as secretary for her local.  Even representing the concerns of other teachers, she was stonewalled.  The final straw for Rebecca came in 2009 when the Great Recession forced the district to eliminate some teaching positions.  Based on the union’s “last in, first out” policy, which prioritizes seniority over effectiveness, a number of outstanding new teachers were going to lose their jobs.  Rebecca said these newer teachers had already established themselves as top-notch educators, increasing their students’ reading levels and boosting test scores.

Rebecca and the other teachers she represented in the union agreed that losing those teachers would be a great disservice to the students who were benefitting from their tutelage.  They decided the offer to take a 3 percent pay cut in order to save their colleagues’ jobs—not only would it save those jobs, it would serve as a show of solidarity with the working families in the community who had suffered pay cuts or lost jobs because of the Great Recession.  The teachers in the Orange County school district are among the highest paid in California; Rebecca and the teachers she represented believed that reducing their salaries by 3% was the right thing to do.

Rebecca relayed the generous offer to her union, and asked them to survey other teachers in the district to determine if they would join the effort to save those jobs.  She said if 51% of the teachers disagreed, then she would drop the issue.

The union refused to even ask the other teachers in the district, instead telling Rebecca not to worry about those teachers losing their jobs and reassuring her that the union would take care of them.  The union’s idea of taking care of the teachers from whom they forcibly extract $1,000 every year to supposedly represent them?  The union planned to offer a seminar on how those teachers could obtain unemployment benefits.

“I was shocked.  I said are you kidding me? They’ve been paying $1,000 a year to this union and that’s all we’re going to do for them?” asked Rebecca.

That was the final straw for Rebecca.  She again opted of the union and become an agency fee payer.  “I knew from personal experience that no matter how hard I tried I couldn’t make a difference, even with a voice,” said Rebecca.

Rebecca’s story is compelling—a woman who just wanted to provide the best education for kids was bullied by the labor union she was forced to pay to represent her.  And she says there are thousands of teachers who agree with her but are too afraid to speak out.  She says intimidation and public castigation is how the union keeps its members in check.

That’s what makes Rebecca a hero that everyone wants to hear speak.  Despite the union bullying and intimidation, she has stood her ground.  She has no political agenda and no axe to grind; she just wants to do what is best for teachers and their students.