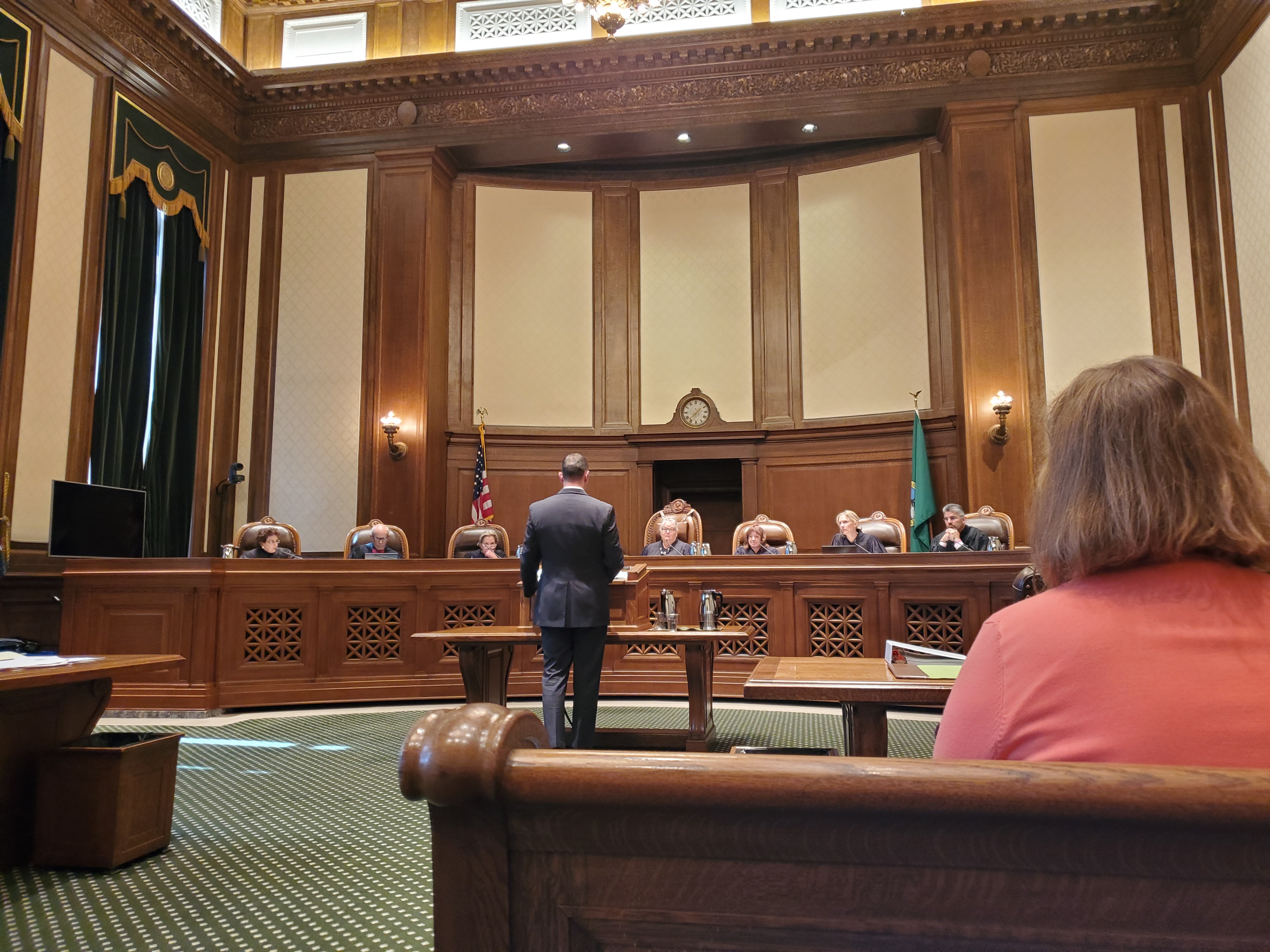 Sound Transit officials and media outlets have, for three years, reported that the agency is collecting car tab tax overcharges because they are simply using a depreciation schedule that was enacted by the legislature in 1996. Their hands are tied, so to speak.

Sound Transit officials have also said, time and time again, that they did not deceive voters in 2016 with the Sound Transit 3 ballot measure, and that the way they would assess higher car tab taxes was abundantly clear.

We have repeatedly shown why this is disingenuous, and that taxpayers were, in fact, deceived.

Today’s Supreme Court hearing, during which justices heard oral arguments from both Joel Ard (on behalf of taxpayers) and Sound Transit, demonstrates we were right.

With a little digging, we uncovered that the agency is not using the valuation method they have argued for three years they are compelled by law to use. This was the heart of Sound Transit’s argument in defending their position that they cannot provide tax relief to the public by switching to a fairer vehicle valuation.

Before the Supreme Court, Sound Transit confirmed they are, in fact, using the 1999 version of the old depreciation schedule. (This was uncovered 24 hours prior to the hearing, and consumed much of the oral arguments on both sides, although the lawsuit was brought on the basis that the 2015 law that authorized Sound Transit to collect higher car tab taxes was drafted in violation of Article 2 Section 37 of the state Constitution. We detailed this here.)

However, if you go to the Department of Licensing website, or to the Sound Transit website, you are told vehicles are depreciated using a valuation method that has been in place since 1999, not 1996. The Code Reviser confirms that this is the depreciation schedule that was in law as of July 1999, effective after the passage of Referendum 49: 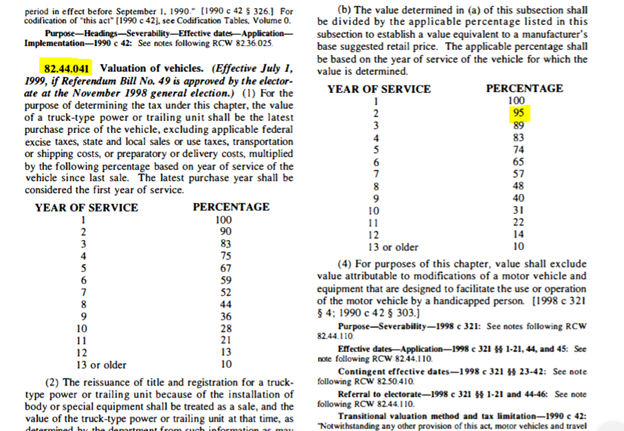 But that’s not the 1996 valuation the law refers to. Here is that schedule, which values vehicles at 100% of MSRP in their second year of service: Sound Transit confirmed they would switch to a different version of the old depreciation schedule in their contract with bondholders which they issued against the Sound Move sales and car tab tax on December 1998 (page 21) – essentially letting bondholders know that the valuation would change for newer vehicles, and what the impact would be.

The new 2006 depreciation schedule more closely resembles fair market values (before you even depreciate using the chart, your car is immediately worth 85% of its value upon purchase). This is what Sound Transit should be using – but has refused to do so. It looks like this: 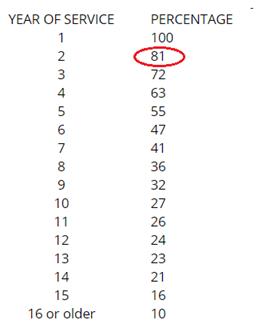 The state Attorney General’s office admits error and declines to participate in oral argument, one hour prior to hearing

This enormous discrepancy was reported yesterday, and an hour prior to the Supreme Court hearing, the state Attorney General’s office notified the court they would not present at oral argument. They admitted that the briefs they submitted contained an “inaccurate factual statement.” Upon learning that Sound Transit was not actually using the 1996 depreciation schedule they have based their arguments on, the state immediately notified the court and chose not to participate.

This left Sound Transit to explain why the agency misled the court and the public.

Sound Transit confirmed they were using a version of the repealed depreciation schedule that they were not legally authorized to use.

Justice Sheryl Gordon McCloud asked, “Doesn’t that lend some credence to the argument that it’s kind of difficult from statute to determine which valuation schedule really applies?”

To my amazement, Sound Transit’s lawyer responded that, “It’s not relevant to the analysis…as a matter of fact, it wouldn’t have mattered what year you put into the statute.” He went on to argue that taxpayers could have just called the Department of Licensing to get the value of their car and the calculation of the 1999 schedule. In other words – trust the government to tell you what you owe, rather than trying to verify it on your own as an independent citizen.

The court pressed further, and asked, “So there’s no way for a taxpayer to tell which depreciation schedule applies to them without calling the executive agency which makes that decision?”

Sound Transit responded, “The purpose of the statute is not to allow the taxpayers to calculate taxes. It is to delegate authority to the local jurisdiction to impose the tax.”

This is a remarkable claim and is quite opposite of the argument the agency has made up until this moment – that Sound Transit “has used the 1996 depreciation schedule since it began collecting the MVET in 1997, continues to use it today, and is legally required to use the 1996 schedule until the bonds to which the MVET are pledged are paid off in 2028.”

Sound Transit’s claim that it doesn’t matter how the law was written, or what year was used, or how the tax is assessed, or whether the public can verify how the tax is paid – is truly unbelievable.

As Joel Ard said in concluding remarks, “It is shocking to hear government say that it doesn’t matter if they follow the statute as written.”

The Supreme Court confirmed today that even they could not figure out how Sound Transit imposed its car tab tax, and had to dig in old archives to find the answer.

People’s frustration is valid, and today’s hearing confirms that.

Rather than admitting error and working to restore public trust, Sound Transit has dug in its heels once again, declaring none of this matters. This hubris could ultimately cost the agency far more than it would have to simply do the right thing.

Read more of our coverage of this lawsuit: