If the state legislature adopts both a CO2 cap-and-trade system and a low-carbon fuel standard (LCFS) - as the budget proposed by State Senate Democrats indicates - it would add about 20 cents to the cost of a gallon of gas in 2023. That would increase to between 41 and 50 cents per gallon, using current projections, in 2028. For diesel, those numbers are even higher.

Those are on top of one of the highest state gas taxes in the country.

The LCFS and cap-and-trade are included in the State Senate budget, which includes more than $10 million to implement both systems. Both policies would add to the price of a gallon of gas. Using the fiscal notes and the experience of California and Oregon with the policies, we can estimate the total cost of adopting both. 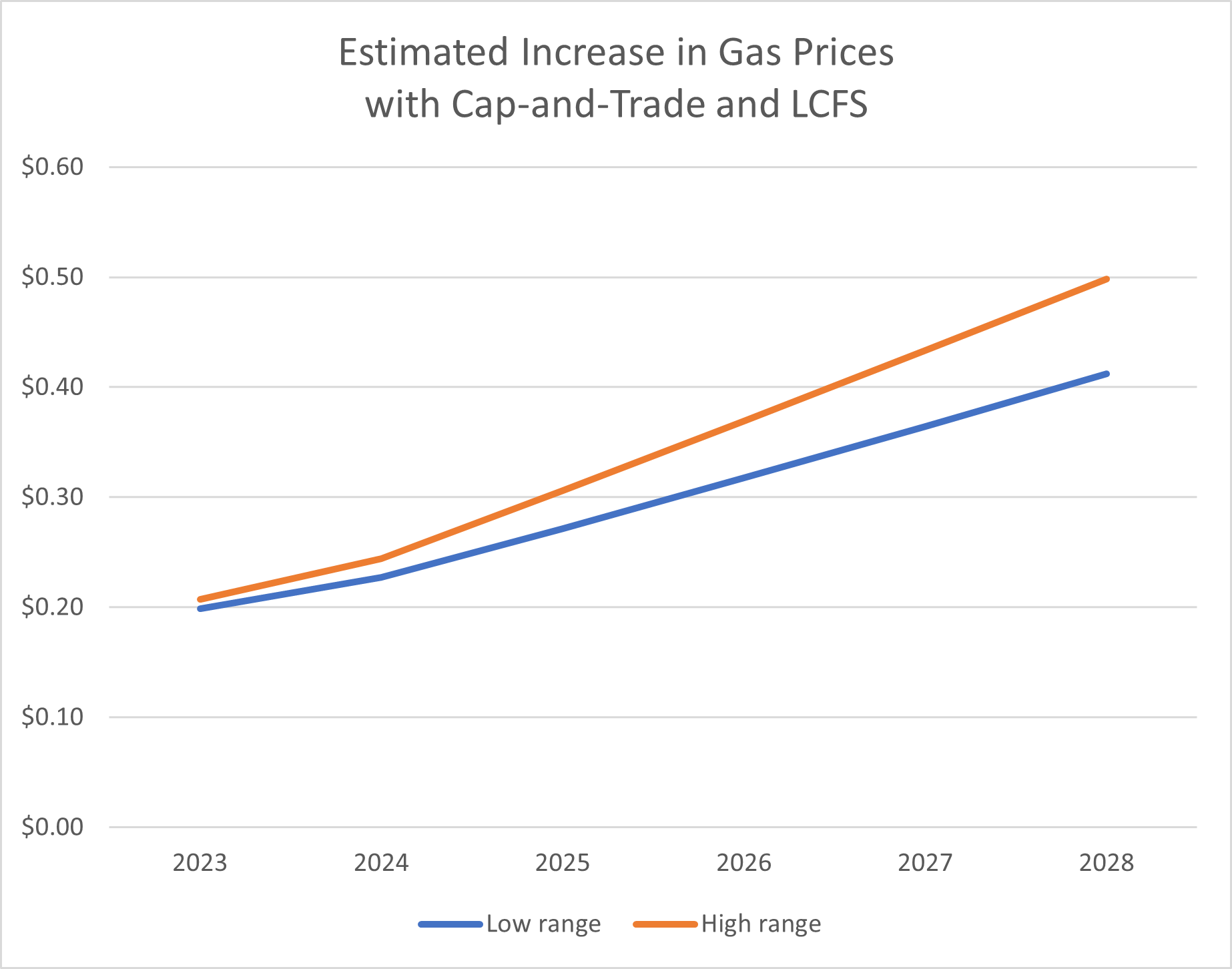 The CO2 cap-and-trade proposal (SB 5126) requires companies that sell gasoline to purchase permits for every metric ton of CO2 emitted by those fuels. The fiscal note for 5126 includes a minimum cost for those permits (p. 94) starting in 2023. The fiscal note indicates these estimates are “conservative,” so this would be the low end of expected cost.

A low-carbon fuel standard would phase in gradually. Both California and Oregon have an LCFS and I used their current prices to estimate the potential cost in Washington state. In California, the current price of LCFS credits is $197 per metric ton (every time I type that I shake my head because it is so astronomically expensive and wasteful compared to almost any other way to cut CO2). Oregon’s current price is lower (but still ridiculous) at $125.74 per metric ton.

Adding those together would increase the price of gasoline by 20 cents per gallon in 2023 and increase to between 41 and 50 cents in 2028. Again, it is worth noting that the fiscal note calls these estimates “conservative.”

None of this accounts for an additional gas tax increase that is assumed in the cap-and-trade bill.

It is important to mention that adopting both a cap-and-trade system and an LCFS is an irrational and wasteful approach. Both of them reduce CO2 emissions from transportation fuels, putting two separate mandates on the same fuels. Putting both mandates in place is needlessly wasteful and the additional cost does nothing extra to reduce CO2 emissions. It simply increases the amount of money Washington residents pay to biofuel companies. Both the LCFS and the cap-and-trade bill pay for many of the same things, including EV charging stations.

This is an enormous cost on top of existing and other proposed taxes. Even assuming cap-and-trade is a wise policy (there are arguments for and against it), there is no reason the revenue cannot be refunded or offset by tax cuts elsewhere. The unfortunate reality, however, appears to be that climate policy is first about generating state revenue and rewarding special interests, and effectively reducing CO2 emissions is secondary.