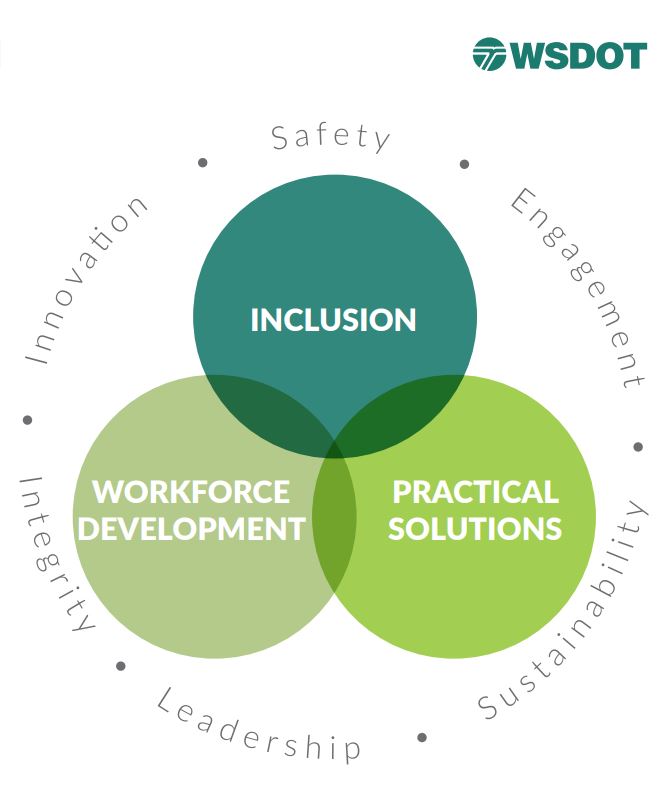 This week, WSDOT leadership testified before the House Committee on Transportation in support of House Bill 2688, which removes the goal of congestion relief from the state’s transportation policy goals and replaces the rest. The agency said the bill supports its strategic plan, pictured in the above diagram.

House Bill 2688  and its companion, Senate Bill 6398, remove and replace existing goals with redefined and expanded policy goals that include: accessibility, safety, environment and climate, health and resilience, equity and environmental justice, preservation, and economic vitality.

First, it effectively solidifies WSDOT not as a transportation agency with a specified servant role, but as a large and amorphous government body that grants the right of mobility to people only insofar as government agencies determine it is appropriate in accordance with planning ideology.

Second, this legislation attempts to limit legislative authority to fund transportation projects. A project would first have to “undergo an evaluation, guided by the goals,” reviewed by multiple public agencies, and scored accordingly. The projects must also be included in a regional transportation planning organization’s existing plan. This shift in authority – away from the legislature and the people to the executive branch – raises serious concerns about constitutionality and accountability.

To be sure, the goals are vague and incoherent. However, the metrics for evaluating the goals are where this proposed policy really goes off the rails.

Below is a list of nebulous language included in the bill that is meaningless and could easily be abused.

The full proposal is available on the legislative website here.

State officials are having enough problems in meeting existing policy goals – specifically the goal of reducing traffic congestion, which is a basic function of our state DOT. Rather than broadening or changing existing goals, lawmakers should consider studying how these goals can be made more narrow, measurable and achievable.

A good place to start would be to reinstate the two performance metrics for reducing traffic delays that were outlined in the 2000 Blue Ribbon Commission on Transportation:

This would help ensure that WSDOT officials are fulfilling their duty to the public and are able to be held accountable for what they do with the tax dollars they are entrusted with.

I recognize this is redundant, but it needs to be said again and again: WSDOT is fundamentally a road and bridge agency, and should not veer into areas of public health or social engineering, while rejecting its responsibility for improving mobility for all Washingtonians. The fact that WSDOT supports gutting existing policy goals and removing congestion relief as a core policy goal should concern everyone.