Encouraging citizens to let their voices be heard, The Tri-City Herald has an editorial today saying:

“In a state emergency, decisions must be made as quickly as possible. That’s why in 1969 legislators gave the governor sweeping authority to take charge in times of crisis. But at the time they were thinking more along the lines of short-term emergencies like power outages and natural disasters. Nobody considered a pandemic that lasts for months or even years. We have said before that Washington state is supposed to have three branches of government, but when it comes to managing COVID, the Legislature has become an insignificant limb. This imbalance must be adjusted. No one elected official should have that much power over people’s lives for an indefinite period of time.”

I have been invited by lawmakers to testify on both bills. Here is a copy of my written testimony on the need to adopt emergency powers reform.

In an emergency, governors need broad powers to act fast. Legislative bodies inevitably take longer to assemble and act than a single executive, so they temporarily delegate their power to the executive in emergencies. But these powers are supposed to be transferred for a limited period of time.

For example, in Wisconsin a state of emergency cannot exceed 60 days unless it is extended by a joint resolution of the legislature, and in Minnesota, a governor must call a special session if a “peace time” emergency lasts longer than 30 days.

When situations last for extended periods, longer term policies need to be implemented and the legislature needs to debate risks, benefits and trade-offs of various approaches. Lawmakers may end up passing the very policies the governor would prefer to see implemented, but they do it after deliberation as representatives of the people and do it in a public process.

“Vermont, Washington, Ohio and Hawaii are among the worst-ranking states because they bestow on their governors the sole authority to determine when and where an emergency exists, and when an emergency ceases to exist.”

Though waiving of a statute during an emergency by the Governor expires after 30 days in Washington unless approved by the legislature, restrictive proclamations aren't subject to time limits, nor do they require any legislative review. 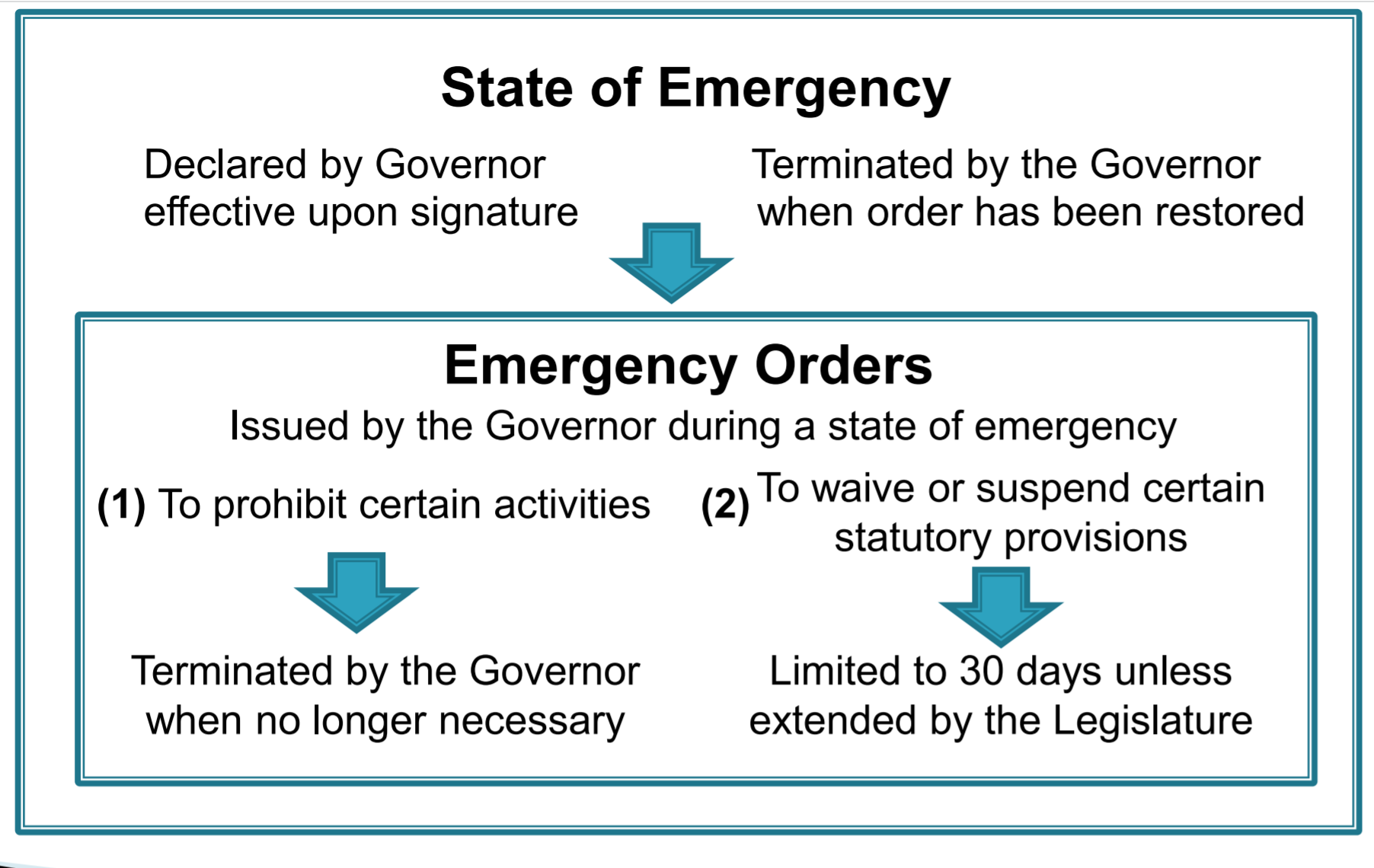 There is no logical reason to treat waiving of statute and restrictive proclamations differently. The same legislative oversight should exist for both and require lawmaker approval after a set period of time.

This reform would ensure that every emergency order by the Governor is subject to at least some type of legislative oversight while maintaining the flexibility to issue very narrow orders to receive federal relief funds.

Long lasting emergency orders should receive the input of 147 legislators from across the state following a public process, allowing the perfection of policies through a collaborative weighing of all the options, alternatives and tradeoffs. This is precisely why the people’s legislative branch of government exists - to deliberate and provide guidance to the executive branch on what policies should be in place and how to implement them.

At some point the executive branch should be required to receive permission from the legislative branch to continue making far-reaching policies under an emergency order. Our system is not meant to be the arbitrary rule of one behind closed doors. It is time to end governance by press conference and return to the normal public legislative process.

Here is my emergency powers reform testimony today on SB 5909.

Here is my emergency powers reform testimony on HB 1772.