What Works and What Probably Won't to Save Puget Sound Orca 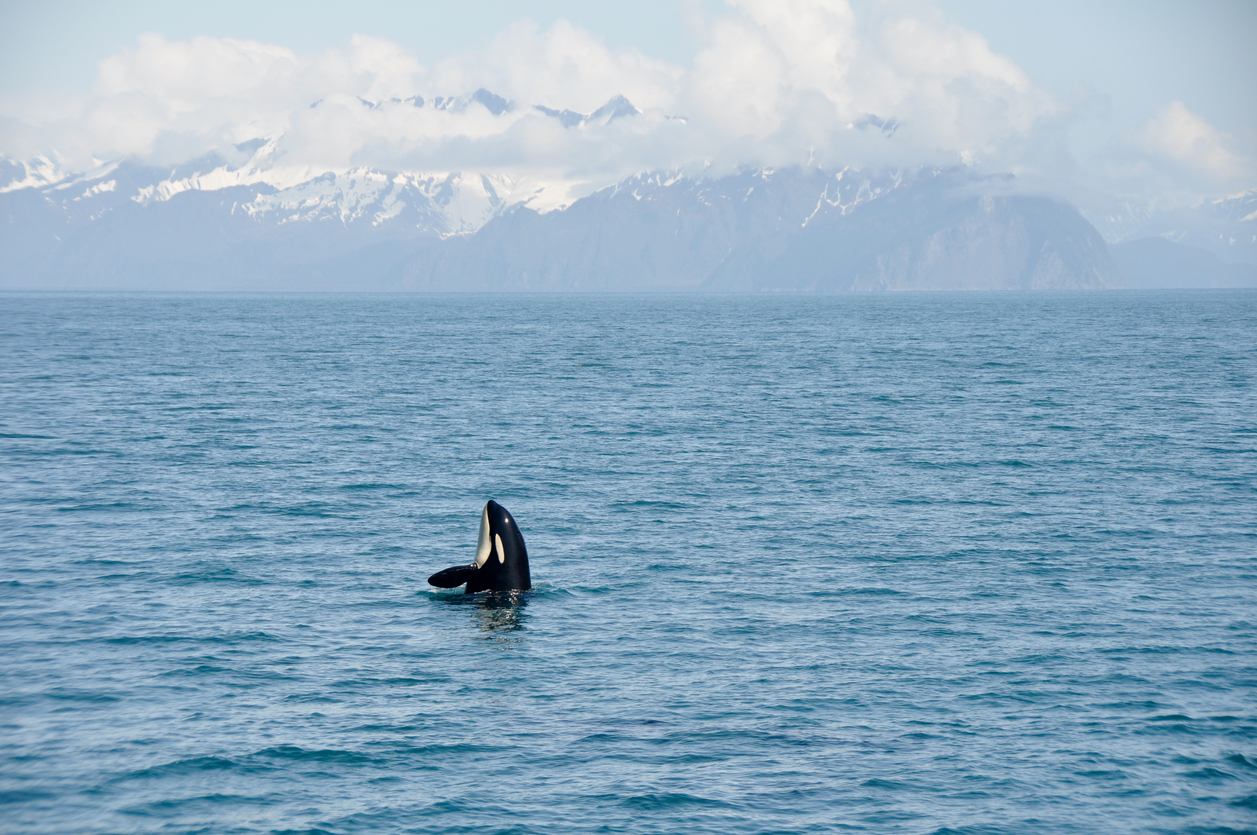 The heartbreaking images of a grieving orca mother in Puget Sound carrying her dead calf have highlighted the need to increase the food supply for the starving southern-resident orcas. None of the orca calves born in the last three years have survived and the primary culprit appears to be lack of forage. There have been many proposals about how to increase salmon and steelhead populations for the orca. Here, I address some of these ideas and briefly provide recent research on these issues.

Tear Down the Snake River Dams

The southern-resident orca are starving today, so efforts to help them need to focus on the near term and have a good chance of success. Destroying the dams offers neither. Two recent studies stand out.

Last year, NOAA Fisheries research from noted that 96% of smolt are successfully passing the dams, meeting the biological target. They wrote, the four Lower Snake River dams “are very close to achieving, or have already achieved, the juvenile dam passage survival objective of 96 percent for yearling Chinook salmon and steelhead migrants…” Removing the dams would have little, if any, impact on population because the marginal increase is so small.

Second, Peter Kareiva, who led the NOAA Fisheries analysis of management options of the dams in the early 2000s, wrote a piece this year noting that tearing down the dams was about symbolism, not science. He wrote, “it is not certain that dams now cause higher mortality than would arise in a free-flowing river.” He concluded that, “it has become clear that salmon conservation is being used as a ‘means to an end’ (dam removal) as opposed to an ‘end’ of its own accord.”

Any minimal benefit from removing the dams (if there is any at all), would only come decades into the future. This is an extremely expensive and speculative policy that does nothing for the near-term problem facing orca.

Reduce Competition for Food by Killing Some Sea Lions

Several new studies show that salmon and steelhead populations are most impacted by growing populations of seals, sea lions and transient orca, to the detriment of resident orca.

A recent study by scientists at the University of British Columbia found that seal density is a key factor in reducing forage for orca. They write, “Changes in numbers of seals since the 1970s were associated with a 74% decrease (95% CI: -85%, -64%) in maximum sustainable yield in Chinook stocks.” This is consistent with many other studies finding that increases in populations of seals and sea lions are having a major impact on prey availability for orca.

In response to the growing body of science, there is currently a bipartisan effort to modify the Marine Mammal Protection Act to allow the culling of some sea lions at the mouth of the Columbia river. 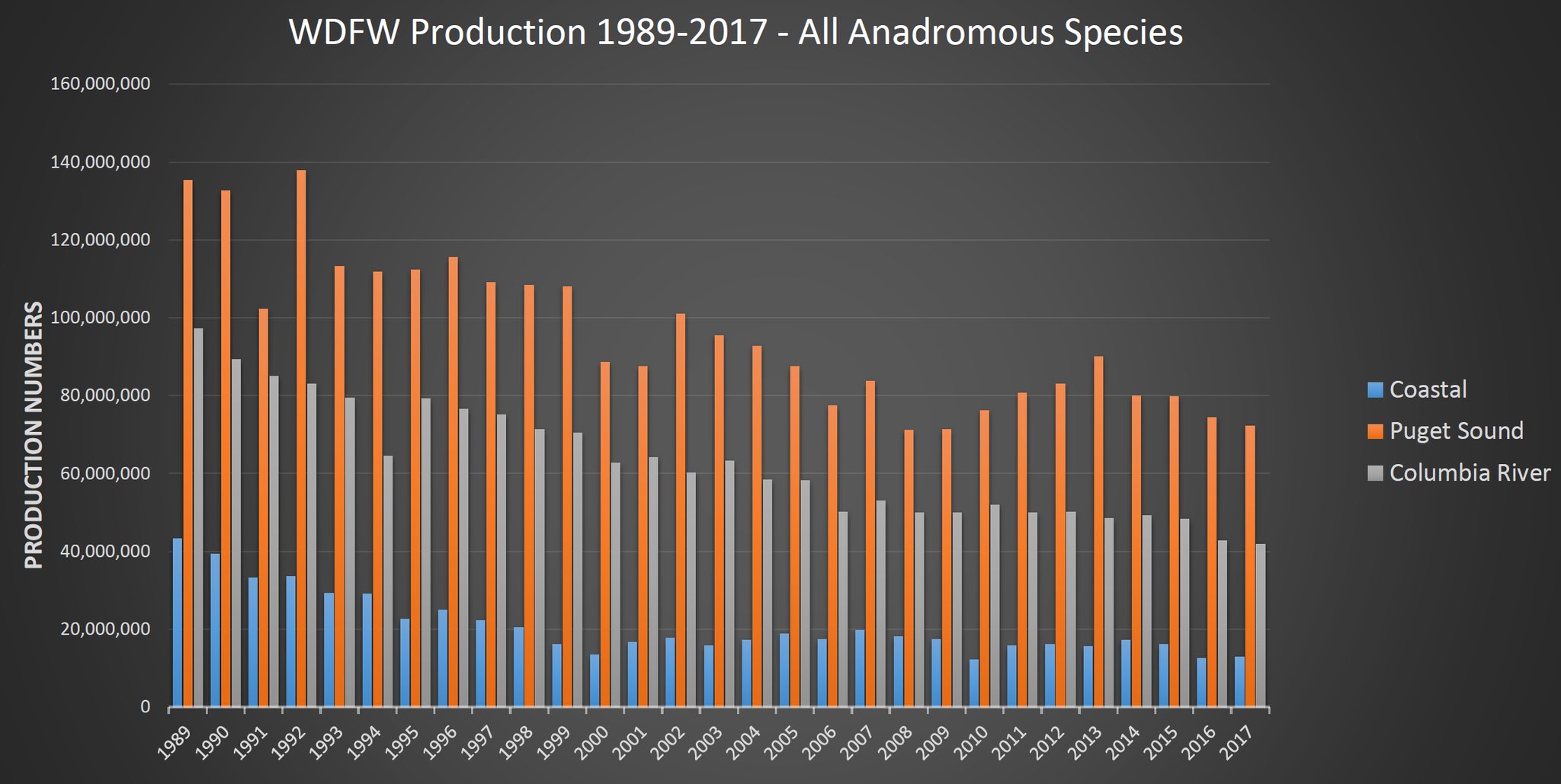 The other near-term option to increase forage fish for orca is to increase hatchery production. The Washington State Department of Natural Resources shared this chart detailing the decline in hatchery release over the last three decades. The number of releases in 2017 in Puget Sound were 40 percent lower than in the early 1990s. This trend should be reversed.

Some environmental activists (not all), oppose hatchery fish, saying they harm wild fish populations. Recent studies find this is not the case. The University of British Columbia study that found seal density had a significant impact on salmon stocks, also found hatchery fish had little impact. They concluded, “hatchery releases were significantly correlated with Chinook productivity in only one of 20 populations.”

Some watershed managers recently asked WDFW to ensure the number of fish released in a watershed didn’t overwhelm the food capacity. This is certainly reasonable, but is not an argument against increasing hatchery production.

When fishery stocks are discussed, fingers are always pointed at sport fishers, commercial fishers, and tribes. Of course, every fish not caught is one more potential fish for orca. Sport fishers, however, are already supposed to release wild fish, so reducing sport fishing might have little to no impact on wild fish stocks.

Additionally, a recent study from the University of Washington notes that fishing is unlikely to be a factor in declining prey availability. Co-authored by a scientist at the University of Washington, a writeup of the study notes, “salmon size and age have decreased at the same time as fishing restrictions have tightened and reduced the overall harvest, which would seem to rule out fishers as a factor. The study itself drew no clear conclusions, however.”

There are other proposals as well, including removing culverts that block upstream fish habitat and improving salmon and steelhead habitat throughout the Puget Sound. These are both worthy efforts when done right. Both, however, are long-term solutions.

The problem facing the orca is here and now. Increasing hatchery production and reducing the population of seals and sea lions that compete for food are the most effective, near-term approaches to increasing the amount of prey available for orca.