In their recent update to the regional transportation plan, planners at the Puget Sound Regional Council (PSRC) are making big assumptions about how much money they could get from taxpayers between 2018-2040.

Combined with current revenues, that’s $196.8 billion over roughly two decades. Of this amount:

Like the Washington State Department of Transportation (WSDOT), regional planners believe strongly in managing - not relieving - congestion. This is clearly stated in the draft plan and reflected in the above allocations.

In the pie chart, transit receives more than half of current and projected new revenues, despite transit serving less than 4% of daily person trip demand.

How the PSRC plans to get $40 billion for their desired projects is even more striking, because their plan requires passage of a long list of new taxes, fees, and tolls. These include: 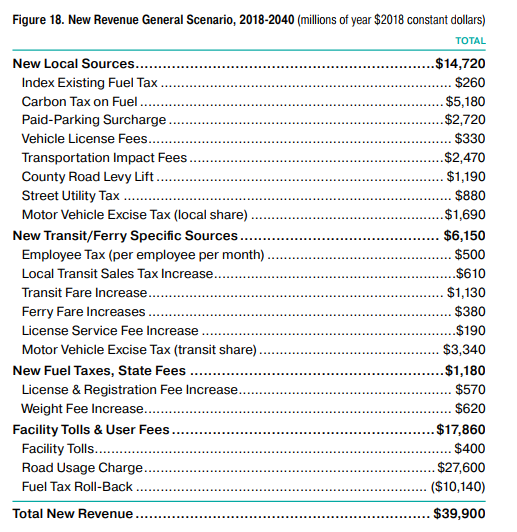 The Road Usage Charge makes up nearly 70% of assumed new revenue. In other words, regional planners are very hopeful it will pass. However, the Road Usage Charge pilot project is just starting this year and is already controversial, so the PSRC’s assumption about its passage and how the money would be spent is highly presumptuous.

If a Road Usage Charge is implemented – the PSRC notes they would like “a broader consideration of possible uses" (they want the charge to not be protected by the 18th amendment like the state gas tax is). This would allow officials to spend the money on what they feel is best for us rather than on actual public demand, a concern we have highlighted repeatedly. If the PSRC gets what they want, the charge will not be a true user fee but a tax, and less money could go to roads.

Although the PSRC has laid out its plan, the public comment period is still open until January 31st. Comments can be submitted on the PSRC website.