Supporters of a measure to repeal the Washington Civil Rights Act report they have collected over 387,00 signatures, well beyond the 260,000 valid signatures needed to submit the measure to the Legislature.  Once it is received, lawmakers have three options: they can pass Initiative 1000 as written; they can do nothing and send the measure to voters on the 2019 November ballot; or they can enact an amended version, in which case both the amended version and the original version of Initiative 1000 would be sent to voters.

If passed, the Initiative would repeal the Civil Rights Act of 1998 and permit state and local officials to use a person’s race, gender or ethnicity as a factor in deciding who may receive or be denied public benefits.

The Washington State Civil Rights Act was passed as Initiative 200 in 1998.  The measure passed by 58.2% to 41.8% and received a majority vote in 38 of the state’s 39 counties.  Polling indicates a majority of men, women, independents and union members supported the initiative.

Previously, public officials had used the race, ethnicity, national origin and gender of citizens as a factor in making decisions about hiring, contracting and college admissions.  Passage of Initiative 200 ended this practice.  The law states:

“The state shall not discriminate against, or grant preferential treatment to, any individual or group on the basis of race, sex, color, ethnicity, or national origin in the operation of public employment, public education, or public contracting.”

The prohibition on discrimination applies to officials at all levels of government; the state, cities, counties, colleges and universities, school districts and other local jurisdictions.  It bars officials from using their perception of a person’s race, gender or ethnicity in a way that harms or benefits any resident of the state.

The measure did not affect any court order or consent decree that was in force on the date of enactment. 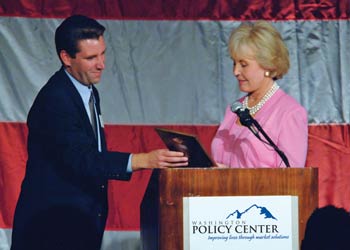 We need a plan for letting people work again