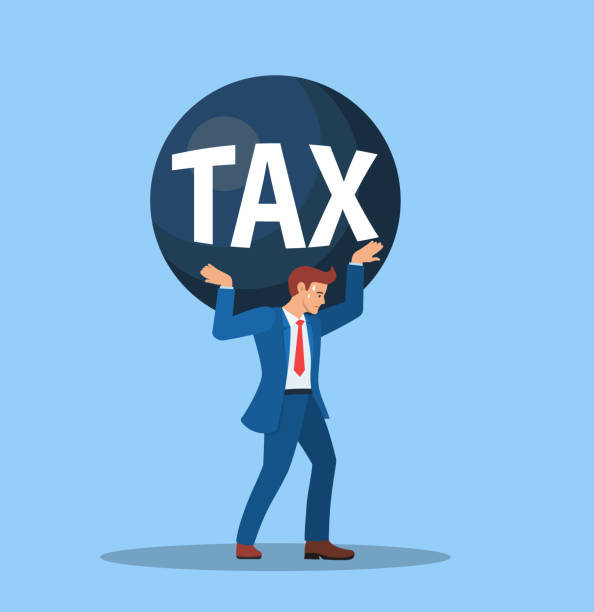 On top of all your current taxes, would you pay an additional 1% based on the value of your total financial assets each year for the privilege of living in a state? Sponsors of new bills proposed today think Washington's wealthy will do just that and that they'll send the state more than $3 billion a year for this privilege instead of moving to a state without this privilege tax. Ironically, these wealth tax bills were introduced despite the state’s bipartisan Tax Structure work group not including this proposal in its recommendations to lawmakers (it was “eliminated” along with consideration of a personal or corporate income tax). The wealth tax bills are HB 1473 and SB 5486.

This is from a presentation last week to lawmakers about the Tax Structure Work Group's recommendations: 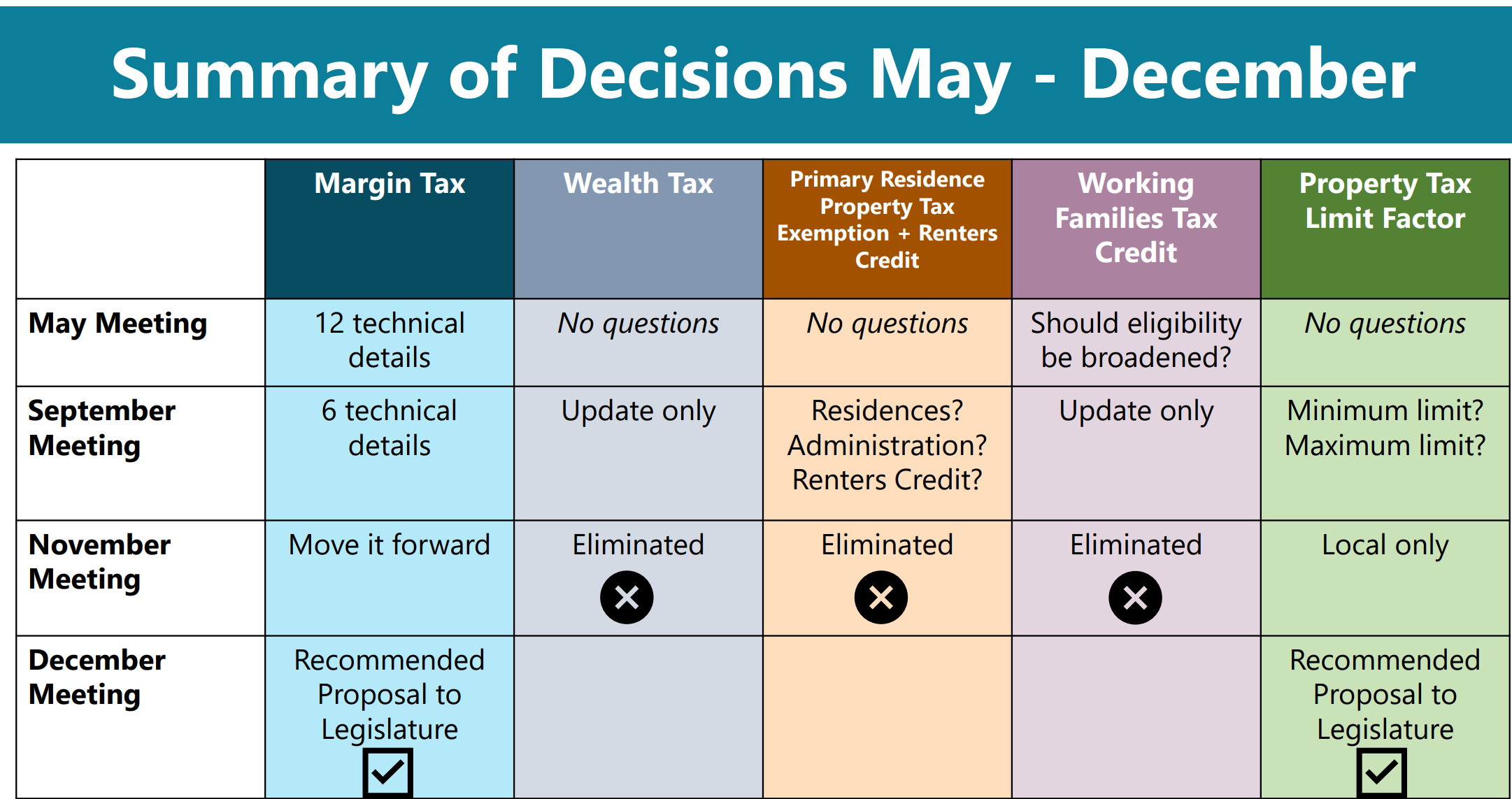 Discussing the lack of public support for the concept of a wealth tax, the Tax Structure Work Group said:

This concern is among the reasons France repealed its wealth tax in 2017. French President Emmanuel Macron said this about why the wealth tax was repealed:

"My predecessor taxed the wealthiest and those who succeeded like never before. What happened? They left."

There is also a constitutional concern with the way the wealth tax may be structured in Washington. According to the state’s Department of Revenue (DOR):

“There is litigation risk that the courts would invalidate the wealth tax on the grounds that it is a property tax that conflicts with the uniformity provisions of Article VII, Section 1 of the Washington Constitution.” 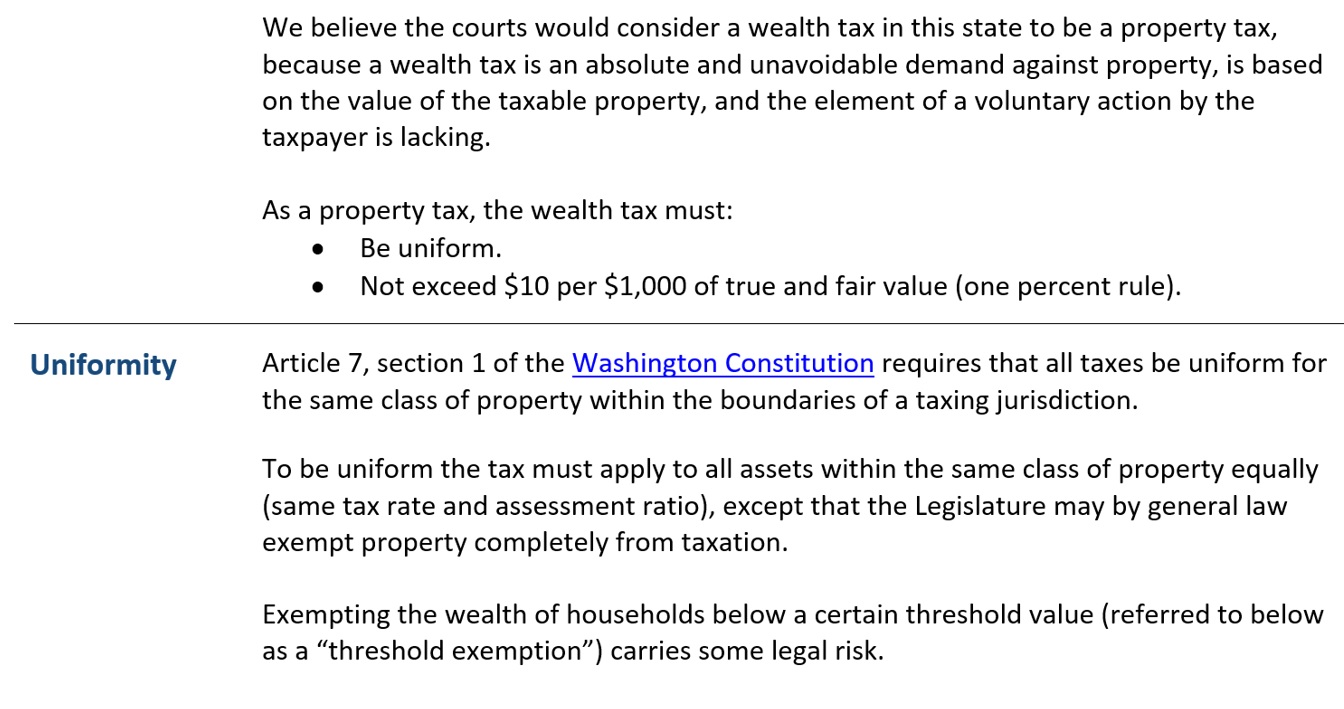 As noted by the Tax Foundation:

“A wealth tax is transparently in conflict with Washington’s state constitution, but that has not stymied prior proposals and it isn’t standing in the way of a new effort to be unveiled on Thursday. California proposals have tended to include exit taxes—designed to continue to tax those who respond by leaving the state—that implicate a host of federal constitutional provisions, a reality that has provoked little consternation among supporters. And most prior proposals would tax worldwide net worth for state residents, with all the constitutional questions that raises …

People will move. California knows people will move. Its response: an exit tax, and wealth taxes owed for years after leaving the state. This almost certainly runs afoul of the Commerce Clause of the U.S. Constitution and interferes with the constitutionally protected right of travel.

But that’s where the economic illogic of wealth taxes leaves states: contemplating constitutionally dubious taxation of nonresidents to counter the simple reality that wealth taxes undercut investment and drive entrepreneurs and innovators out of state.”

We haven’t even seen the conclusion of the capital gains income tax legal fight yet (state supreme court hearing on January 26) and it looks like some lawmakers may already be gearing up for another tax increase with suspect constitutional viability. That is of course unless they are also proposing a constitutional amendment to implement the wealth tax.

But of course. New wealth tax has a referendum killing emergency clause: “This act is necessary for the support of the state government and its existing public institutions.”