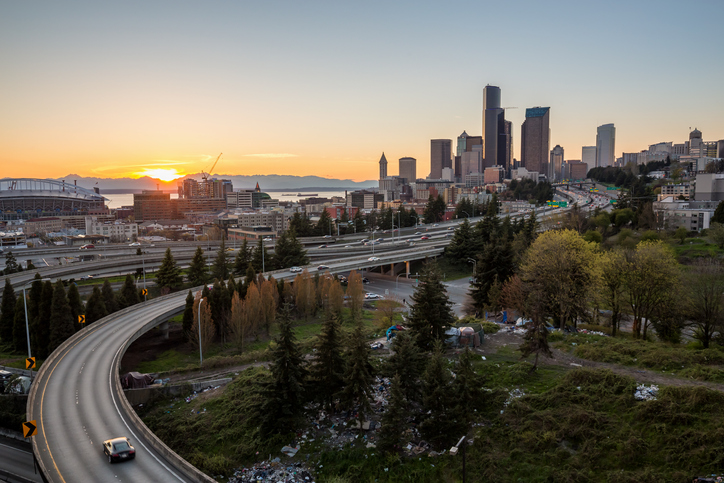 Seattle has one of the worst homeless problems of any major city in the United States. Walk down virtually any street in the downtown core or in many neighborhood business districts, or stop at most parks in the metropolitan area and you will find people living in unconventional situations surrounded by trash, human waste, and needles.

The problem may have been compounded by the COVID-19 pandemic, but it is clear that the number of homeless people in Seattle has been increasing for at least the past decade. This is in spite of multiple government and private agencies ineffectively spending hundreds of millions of taxpayer and philanthropic dollars to combat the situation.

The Regional Homelessness Authority is a joint Seattle/King County government organization that is charged with overseeing “policy, funding, and services for people experiencing homelessness countywide.” According to the Authority’s website, 10,258 people used public services during January-2016, with that number rising to 13,147 by January-2020. This represents a 28 percent increase in just four years. Likewise, counting individuals living on the streets and in parks at a specific point-in-time showed an increase of 10 percent during the same four-year period.

While the number of homeless people increased over the past four years, government funding to combat the crisis continued to increase without demonstrable results. Seattle’s Homelessness Response program spent $68 million in 2017 on the crisis, $78 million in 2018, and increased spending to $116 million in 2020. These funds went to a combination of outreach services, sanitary clean-up, and in 2020, to affordable housing.

While those amounts of money are staggering, they do not reflect the total cost of dealing with the homeless crisis in the area. Researchers for the Puget Sound Business Journal did an in- depth study of all the costs associated with the homeless population, including such things as medical treatments and law enforcement. When all services are taken into account, the amount spent on the homeless problem in King County is over $1 billion per year.

There are multiple documented causes for homelessness, although officials often find it easiest to focus only on economic issues. Seattle, and to a growing extent King County, have very politically left-leaning government officials. Local bureaucrats have tended to blame the free market and capitalistic activities as the root cause of the homeless problem, rather than the failures of their own programs. Ever rising rents, income inequality, and lack of affordable housing are often cited as the fundamental reasons for homelessness. Yet research shows that many other factors, such as mental illness, drug addiction, domestic violence, and especially disaffiliation play a predominant role in fueling the crisis.

In the early 1990s, two homeless activists wrote what is arguably considered to be the definitive book on homelessness in the United States. The authors, Alice Baum and Donald Burnes, recognized the accepted causes of homelessness, but went further by stating that it is a condition based on “personal lives out of control.” In other words, people who embrace and participate in homelessness are disaffiliated and disenfranchised from traditional social contacts.

Included in this group are obviously addicts and the mentally ill, but fundamentally they are people without a family or a social support system. In fact, the authors found that these individuals may not want a support system. Put in that perspective, the traditional policies used in attempts to solve the homeless problem may have a very limited chance of success.

Elected officials in some other cities have been successful in getting homeless people off the streets and delivering the public housing, health, and counseling services they need. A mix of commonsense law enforcement, securing public spaces for safe use by the community, protecting victims of theft, property crimes, and domestic violence and providing public health and low-cost housing services, such as tiny houses, to those who need them led to a more caring and humane response to homelessness in these cities.

Residents of Seattle and King County have a right to walk down streets and go to parks without worrying about their safety. They have a right to enjoy civic life without encountering panhandling, strewn garbage, human waste, and drug paraphernalia. Minimum standards of public courtesy, safe behavior, and respect toward others should be expected of everyone.

Likewise, society has a responsibility to provide homeless individuals with alternatives that are compassionate and goal-oriented to solve the homelessness problem. These alternatives should include protecting victims of domestic violence, providing mental health services, and offering low-cost housing to those in need.