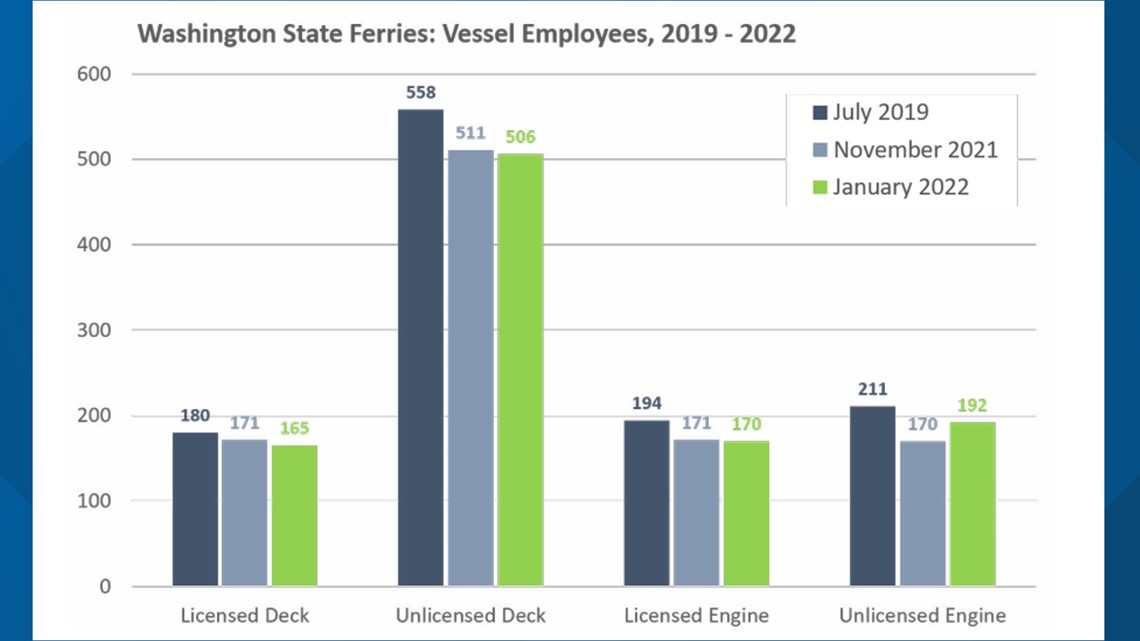 A July 6 service alert from Washington State Ferries (WSF) informs that most of its routes are going to be operating on alternate, reduced schedules until further notice. Why? The ferries are short-staffed. That should come as no surprise. Gov. Jay Inslee’s strict vaccine mandate led to the firing of more than 400 transportation workers. The largest loss was within WSF.

While the alert says WSF faces “crewing shortages due to a global shortage of mariners that has been worsened by the pandemic,” a WSF employment chart (pictured above) indicates the governor’s COVID-19 vaccine mandate on state employees gets much of the blame. Ian Sterling, ferry spokesman, also told KING 5 News that the vaccine-or-lose-work mandate was an issue in retaining crew members.

A March 8 WSF service restoration plan says that from 2018 through 2020, WSF exceeded its performance metrics systemwide. In 2021, however, it fell short. The plan says, “This drop in reliability can be directly correlated with COVID impacts on crewing and vessel resources.”

COVID-19 vaccines appear to help people avoid serious illness and death. However, the Centers for Disease Control and Prevention reports vaccines are not effective at preventing transmission of the virus. Further, people of working age and subject to the governor’s vaccine mandate are not dying from COVID-19 in a way that risks depleting hospital resources or the state workforce. And if you do believe the unvaccinated are a threat to public health, despite the above realities, they will be threats whether they are state workers or not.

Instead of following the science, the governor continues to double-down on coercion. On June 30, he issued a directive saying that he will maintain a permanent and new-hire COVID-19 vaccination requirement for workers in Washington state's executive and small cabinet agencies. He includes the addition of boosters in that mandate, regardless of data that shows people with boosters contracting COVID-19 more often than those who are not boosted. Read more about that here.

COVID-19 is a serious health concern, but it is no longer a crisis. Continuing to impose ineffective mandates only adds to the harm people are experiencing.

Instead of dictating senseless, career-wrecking mandates and directives that hurt state service levels, the governor should be authoring apology letters and trying to get WSF and other state employees back to work so vital public services can be restored.

Update: Public comment is being accepted on the booster-inclusive vaccine mandate during its rulemaking phase. If interested, submit written comments to Brandy Chinn at the Office of Financial Management, P.O. Box 47500, Olympia, Wash., 98501 or brandy.chinn@ofm.wa.gov by August 4. Proposed rulemaking information is here: https://ofm.wa.gov/sites/default/files/public/rulemaking/rules_dev/WSR_22-14-104_CR102.pdf.