These two claims are completely inaccurate, according to information from a lead scientist at the National Renewable Energy Laboratory and from forest scientists. 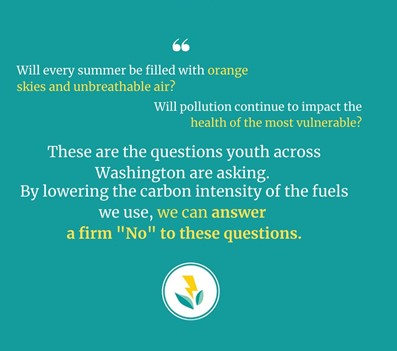 In a recent graphic shared on Twitter, environmental groups claimed that an LCFS mandate would mean summers wouldn’t be filled with “unbreathable air,” and that pollution would not “impact the health of the most vulnerable.” Neither of these claims are true.

First, the groups ask, “will pollution continue to impact the health of the most vulnerable?” LCFS advocates claim that switching motor fuels, primarily diesel, to biofuels would decrease on-road pollution, which they blame for health impacts in those communities.

This claim is simply not correct. The research, such as that used by the Department of Ecology and the Puget Sound Clean Air Agency, on the impact of biofuels on pollution is outdated. So, I contacted the National Renewable Energy Laboratory to learn what new research reveals about the air quality impacts of biofuels. A Senior Research Fellow in the Fuels and Combustion Science Group responded to me as follows (original e-mail available on request):

“For trucks which might use biodiesel or renewable diesel (RD), new emission control technology introduced in 2010 largely eliminates fuel effects on emissions (not entirely).  This is especially true for PM emissions – although both RD and biodiesel reduce PM emissions from pre-2010 engines.  For NOx, once the catalyst is hot, fuel does not affect emissions.  During cold start and warm up you see small reductions in NOx for RD and small increase in NOx for biodiesel. But published emissions studies are sparse, in large part because these differences with conventional diesel have become so small.”

The impact of biofuels on both particulate matter (PM 2.5) and nitrous oxides (NOx), would be small and would decline over time due to the declining number of trucks operating with pre-2010 engines.

The impact is negligible when we consider that in 2014, using the old studies, the Washington State Department of Ecology found an LCFS mandate would reduce particulate matter (PM 2.5) – the pollution most associated with asthma – by less than one percent when the LCFS reached the first threshold target, which is 2028 in the currently proposed bill. Most of that improvement, as analysis of California’s LCFS mandate found, would go to wealthy communities.

To claim that an LCFS mandate would reduce “impact to the health of the most vulnerable” is false and completely unscientific.

Additionally, the claim that an LCFS would ensure that we don’t have summers with forest fires – “a firm ‘no’” according to advocates – is simply ludicrous.

Under any emissions scenario, including one in which the entire world somehow meets the Paris Climate targets, temperatures will be higher in 2100 than they are today. The LCFS reduces CO2 by a small amount in a state with a small emissions level to begin with. Total US CO2 emissions in 2018 amounted to 6,677 million metric tons. An LCFS mandate might reduce a meagre 2.7 million metric tons of CO2 in 2030 – 0.04% of the 2018 amount for the U.S. That amount would make zero difference in climate, even a century from now.

To claim otherwise is detached from reality, unscientific, and irresponsible.

The only thing that will reduce forest fires and our smoky summers, is thinning and harvesting to restore forest health.

All policies can be debated. All policies have tradeoffs. When advocates turn to completely baseless claims made in a tone of absolute certainty, it demonstrates how poor the underlying policy they are pushing for truly is.