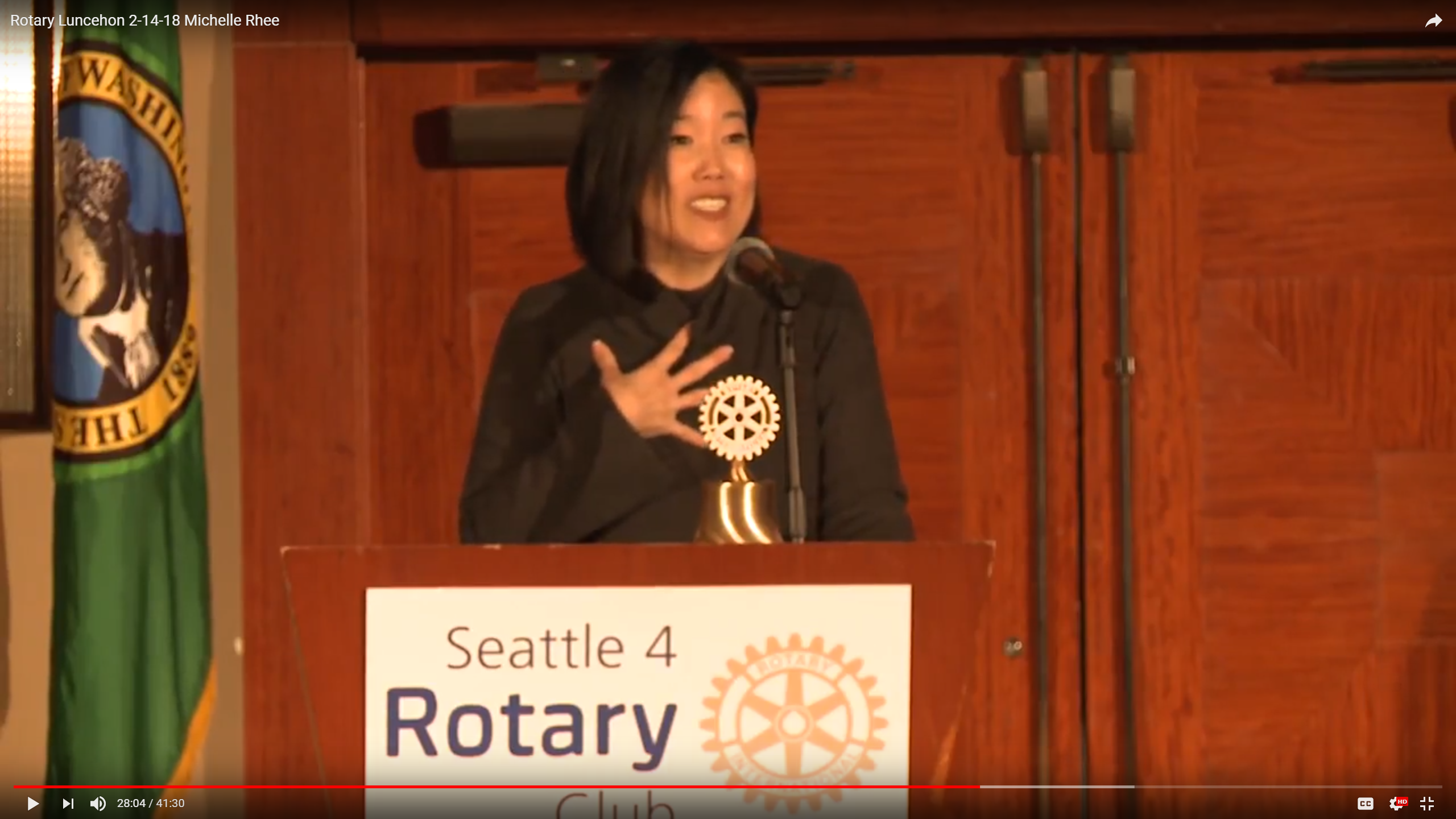 This week Michelle Rhee was in Seattle, speaking to the Young Presidents Organization and Washington Policy Center, her hosts, and to the Seattle 4 Rotary Club.  Ms. Rhee provided Seattle’s leaders a riveting account of her experiences as Chancellor of Washington D.C. Public Schools, 2007-2010. After two years under her leadership, D.C. Public Schools went from being the lowest-performing to the fastest-growing district in the nation. Fortunately, the Rotary taped her speech. My favorite part is Ms. Rhee’s story about the district’s private school voucher program.

Ms. Rhee had opposed vouchers, but as Chancellor felt she needed to listen to parents applying for the program. One mother told Ms. Rhee that her child’s zip-code assigned school was failing 90 percent of students. This mother told Ms. Rhee the voucher program was her only option to send her child to a good school, and what was she supposed to do?

In her honest and direct way, Ms. Rhee, a Democrat, told the Seattle Rotary:

“I was looking these mothers in the eye, mothers just like me because I had school-aged kids at the time. ... And I thought ‘Who am I to deny these women an opportunity for their children to get a good education?’ Because I knew that I could  not provide them with a spot at a high-performing D.C. public school, one that I would be comfortable sending my own kids to. I am not going to say no to them. I am not going to say ‘just give me five years. Give me a chance to implement my strategic plan, and then their kid will be OK.’ No, because their kid was in first grade. And your first-grader has only one year in the first year and one chance to learn how to read and be on grade-level. I wasn’t about to do that. So I supported the voucher program.” (At 28:08)

Unsurprisingly, this caused an outcry from school choice opponents in the union and the media. But Ms. Rhee did not back down. Instead, she called out the hypocrisy of those who have school choice for their own families, while opposing school choice for other families.

D.C.’s voucher program is called the Opportunity Scholarship Program. Today it serves about 1,200 low-income students. The average household income of students in the program is $20,000. Since the program began in 2004, more than 6,385 students have been awarded a private school scholarship. The program has a 90% graduation rate, and most students enroll in colleges and universities around the country.

Ms. Rhee told the Seattle Rotary school choice and competition is good for students and families and for the public school system. Ms. Rhee came to Seattle and inspired us. The Seattle Rotary gave her an enthusiastic standing ovation.  May she live long and prosper.