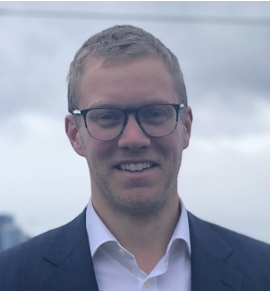 Carsten Belanich is a WPC Young Professionals Advisory Board member. WPC spoke in depth with Carsten about what led to his involvement with the organization and why it is important to him.

WPC: How and why did you become interested in the free-market school of thought?

Carsten: I grew up in Seattle. In high school, things were fairly one-sided. You go along with what your friends which, I think, is normal.

For college, I went to Claremont McKenna in California and had a couple of influential professors. One of my favorite professors had worked in the Reagan administration. His arguments made sense to me – he opened the chink in the armor. From there I started to do some of my own reading – Hayek, Berlin, Burke, and so on. My opening to the free-market school of thought was intellectual – and I hope I’m still evolving!

WPC: How did you hear about WPC?

Carsten: By coincidence. I just googled “Washington State Think-tanks” and WPC came up. Then I applied for an internship!

Carsten: I enjoy events. WPC has a great opportunity in Seattle. People are fed up with the status quo, but don’t know where to turn – for example, on the head tax. At our happy hour in March, with Rob McKenna and Matt McIlwain, young people from all walks of life came to listen and talk. To me, it suggested that there’s a middle ground to be seized here.

WPC doesn’t fight the “culture wars”. It focuses on the local level, the county and state level of government, which most directly affects your daily life. How can we improve traffic, schools, and the environment for small businesses? These are prosaic issues. WPC addresses them without baggage and proposes practical solutions.

WPC: How is being involved with WPC serving you in your career, life, or philanthropic goals?

Carsten: It’s refreshing and healthy to meet people who are interested in the same things as you, even if we happen to disagree with each other. We all talk about civic engagement. In a sense, working with WPC is civic engagement, a concrete way to get involved. Active participation with local government is what most impressed Tocqueville while in America.  I’d say you don’t have to agree with WPC a hundred percent of the time – perhaps even fifty percent of the time – to get involved with WPC on a particular issue that you’re passionate about.

WPC: What value do you think WPC brings to the state?

Carsten: A non-partisan voice for sanity. On a practical level, WPC works closely with state legislators, providing them with careful, “pro and con” policy analysis to help them make informed votes in committee and on the floor.

WPC: What policy area is most important to you and why? What is one change/ impact you’d really like to see in our state?

Carsten: Transportation and traffic. I ride my bike to work – I’m lucky that it works for me, I like the exercise and, sometimes, it’s much faster than driving in Seattle! However, it seems like additional bike lanes in an already crowded Downtown represent a serious misallocation of resources – they simply don’t move enough people per dollar spent. Fundamentally, traffic is an issue that affects us all. And it’s intrinsically non-partisan.

WPC: Since you’ve been involved with WPC, what’s the biggest impact you’ve seen WPC have?

Carsten: Working with the legislature and being the alternative voice in the news. Those things, I believe, are the most substantive work that WPC does. Another important thing are the events and college clubs – again, our democratic experiment depends on civic engagement.