An initial calculation of low-end cost figures reported by Sound Transit shows officials want to spend a disproportionate amount in the North King and Snohomish subareas. 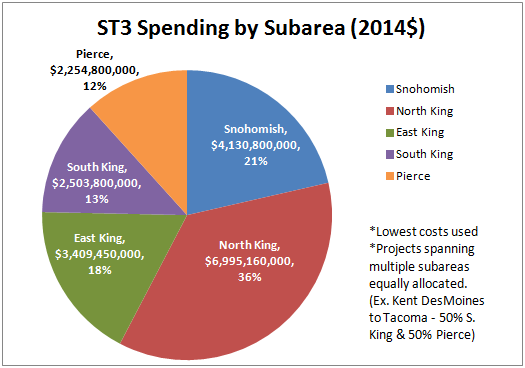 Sound Transit began their rail and bus program in 1996 with the Sound Move ballot measure. At that time, Sound Transit officials promised they would adhere to subarea equity principles, and include “utilizing local tax revenues and related debt for projects and services which benefit the subareas generally in proportion to the level of revenues each subarea generates. This equity principle will apply to the ten-year system plan as well as all future phases.” (Emphasis added.)

On the surface, Sound Transit’s equity policy seems iron-clad and easy to understand – that officials would spend the taxes they collect in an area on services to benefit people living in that area.  At a time when public trust of people in government is at an all-time low, you would think this is one promise Sound Transit officials would want to keep.

Not so fast, though. According to Sound Transit itself, the board members, led by King County Executive Dow Constantine, are the ones who decide what “equity” means. Even worse, Sound Transit officials now say they don’t intend to follow the founding promises they made to the public in Sound Move.

Sound Transit Spokesman Geoff Patrick says, “As long as a ballot measure identifies where the funds originate and are spent, Board members can define equity in whatever fashion they believe serves constituents.” He went on to say, that “a future ballot measure doesn’t have to use the same approaches as past measures.” In other words, “equity” can mean whatever the board wants it to mean – and even their chosen definition does not have to be consistent over time.  Some people call that a pie crust promise – one that is made to be broken.

Sound Transit officials already do this with their Express Bus cost allocation. Despite 75% of bus routes either beginning or ending in Seattle, the North King subarea pays nothing for this service. Instead, people living in all four other areas pick up the tab. Similarly, Sound Transit’s commuter rail program costs are spread to areas outside of Seattle, yet that service exists largely to move workers in and out of downtown.

The Seattle Times editorial board recently asked Sound Transit if the suburbs would “get a fair return on their Sound Transit investment, especially compared to costly tunnels and spurs proposed for Seattle neighborhoods?” To answer that, Sound Transit officials should move past a subjective definition of benefit equity, and provide more quantitative analysis to compare the real costs and benefits to each subarea.