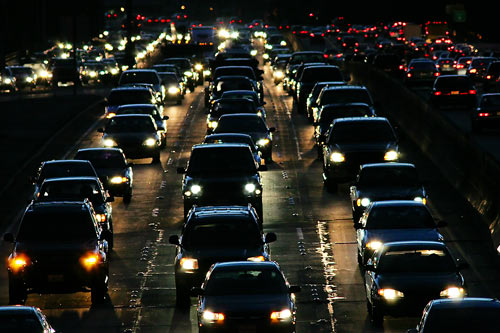 This Opinion/Editorial originally appeared in The Seattle Times on February 1, 2016.

Washington State Department of Transportation officials say their plan to impose tolls on drivers on Interstate 405 is working. They say demand has exceeded expectations, that use of the toll lanes is higher than expected and has caused the price to hit the maximum cap of $10 on multiple occasions, including three days in a row last week.

But before officials ask the state Transportation Commission for the ability to raise toll prices higher, they may want to pause. A growing number of citizens and lawmakers are backing an effort to remove the toll lanes, raising questions about WSDOT’s implementation strategy and the lanes’ effectiveness.

The decision to toll I-405 has been wildly controversial. To start, the public was led to believe they would receive new general-purpose lanes paid for from gas-tax hikes in 2003 and 2005. The public started to see some initial benefits as early as 2007, when WSDOT announced travel speeds doubled to 45 mph through Kirkland after adding a lane. But state lawmakers changed that plan in 2011, allowing WSDOT officials to build toll lanes instead of the regular lanes promised.

Also, traffic congestion is worse than WSDOT projected. WSDOT officials said general-purpose speeds during a typical afternoon commute between Bellevue and Lynnwood would average 37 mph after tolling. However, WSDOT officials have reported the actual travel speeds in the regular lanes are around 26 mph, per their latest data release. Toll prices are also higher than projected, as WSDOT estimated the average toll during the commute period would be less than $2. Before the holidays, the average was $3.75.

Still, WSDOT officials say toll lanes are needed. They argue these lanes can better accommodate growth because additional regular lanes would just fill up. Transportation planners in the Puget Sound region call for all lanes of every highway to be similarly tolled by 2030. If the plan is fully implemented, the public might find they have to pay tolls to drive on public lanes and highways that have already been built — this is like charging an entrance fee to use a city park. Between 2030 and 2040, these new tolls would generate an estimated $22 billion from toll payers.

In other words, drivers and transit riders are being told to choose between having toll lanes or suffering permanent gridlock. This false choice fails to consider other options the public may prefer.

Officials could work to relieve congestion as laid out in the official 2002 Interstate 405 Master Plan — not just manage it through pricing. In fact, the toll lanes on I-405 may act as a deterrent to providing adequate capacity in the future to meet growing population and employment expectations.

Changes to I-405 may be on the horizon. Reflecting the mood of their constituents, state Sen. Andy Hill, R-Redmond, (chair of the Senate Ways and Means Committee) and state Rep. Mark Harmsworth, R-Mill Creek, (assistant ranking member of the House Transportation Committee) drafted legislation to change the way I-405 works. Their bills would open a toll lane in each direction between Bothell and Bellevue to the general public, leaving a single toll lane throughout the 17-mile corridor. They also want to open the highway equally to all travelers in the evening, as it was before WSDOT officials imposed the tolls. Their bill received a public hearing just a week into the legislative session.

If state officials want an additional express toll lane, they should make their case to the voters or look to partner with the private sector to provide it. Or, officials could cut the gas tax that funded the I-405 project since the road was not delivered as promised.

Tolling is a tool that can be used to add mobility that serves the community and funds needed public infrastructure. Express toll lanes have worked in other regions and should be explored, but not at the expense of taking away a lane the public was promised and already paid for and would provide congestion relief for commuters.

What the legislature can teach ballot sponsors about bill titles