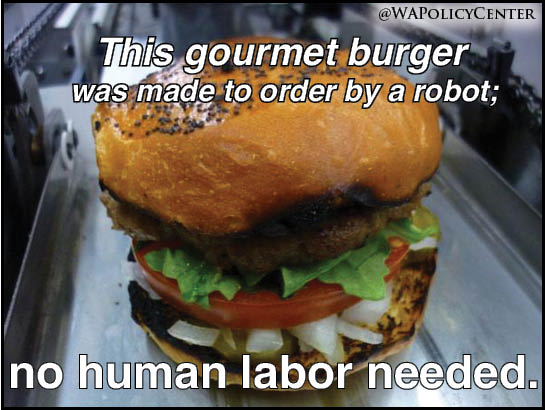 California, often the petri dish of bad policy ideas, has formed a Fast-Food Council (created with the passage of Assembly Bill 257) which is tasked with drafting “sector wide minimum standards on wages, working hours, and other working conditions.”

The council is allowed to raise minimum wage to $22 per hour, which is a massive increase over the current $15.50 per hour, mandated by the state.

It hasn’t taken long for businesses to react, realizing that their already razor thin profit margins (the national average on fast food is 4% or less) are about to evaporate.

The national fast-food chain, Chipotle, in response to the prosect of a significant increase in labor costs, has started to trial automated kiosks that will replace employees in some of its restaurants in California. If the trial is successful, it may be expanded to other states where labor costs are high and are being forced higher through government mandated minimum wage policies.

As predicted by the Washington Policy Center, when the government interferes with the free market, there often are negative consequences. In the case of the California push for an unrealistically high minimum wage, the result isn’t higher wages, it is the loss of entry level and seasonal jobs with a reduction in hours for employees that remain employed.

Here in Washington State there have been several efforts at the local level to mandate a high minimum wage, including hazard pay overrides, that have resulted in store closures and job losses. Restaurants are in a similar position to stores. Once the state mandates high wages, they have to lay off staff, reduce hours or as Chipotle has done, automate some of the processes to reduce costs.

For the restaurants that decide not to reduce labor hours, the only option is to increase prices which will make them less competitive with other restaurants that choose to automate operations.

If Washington continues to follow California's race to have the highest raise minimum wage in the nation, rather than letting the free market determine the wage to price equilibrium, your next fast-food burger might be ordered on a screen and could cost significantly more.